Crossbones News:
9-19-2017: Could Crossbones return to the MCU? Frank Grillo was quoted in an interview saying that Crossbones could potentially return to the MCU.  While his character was blown up in Captain America Civil War it is possible that the appearance could be in the past or that he is returned to life by an infinity gem or by the Scarlet Witch.  The Scarlet Witch took part in his death by elevating before he exploded.  Grillo is quoted as saying:


"It’s great to be part of Marvel too," he says, "and I have three boys who are fanatical about Marvel, and I was surprised not too long ago because there is some news that nobody knows yet, to do with my character, that’s going to be really interesting and I’m excited about that.

Crossbones Bio:
Brock Rumlow is the brutal, thug leader of the Savage Crims gang on New York's lower east side.  After killing a man Rumlow flees the authorities and joins Taskmaster's school for criminals.  Showing great skill in fighting, assassination, guns, and piloting vehicles he quickly is elevated to an instructor at the school.

For a time he works as a mercenary under the Red Skull.  The Red Skull is impressed when Rumlow is the only member of his team to survive an attack on Arnim Zola's Swiss Chateau.  After this Red Skull gives Rumlow the name Crossbones and makes him into his full time henchmen.

As one of the primary henchmen of the Red Skull he takes part in numerous plots and battles with the Captain America.  He is very loyal to the Red Skull.  Crossbones even assembles a team of former Red Skull henchmen to search for the Skull when he goes missing.

During the Fallen Son Story line Crossbones assassinates Captain America with a rifle.  However, it is revealed that a mind controlled Sharon Carter fired the fatal shot from close range. 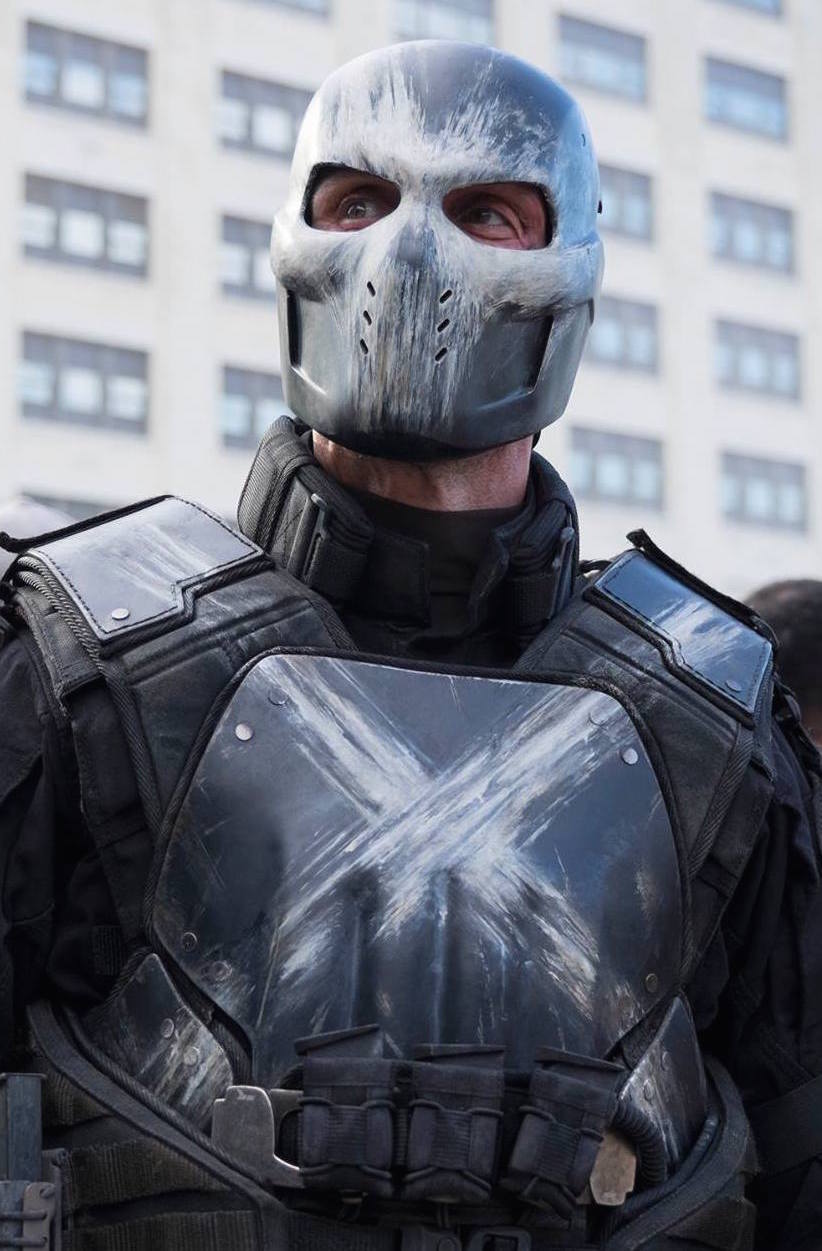 Actor Frank Grillo plays Brock Rumlow in Captain America 2 the Winter Soldier.  Initially, Rumlow appears to be a loyal SHIELD agent and part of a special commando unit.  However, Rumlow is revealed to be part of a large group of Hydra sleeper agents within SHIELD.   He attempts to hunt down and kill an AWOL Captain America and Black Widow.  In the film's climax he battles the Falcon as the building they are in (The Triskelion) collapses.  Though badly burned and injured he survives the collapse.

Brock Rumlow's new Crossbones appearance from the set of Captain America 3: Civil War.  He appears early in the film where he battles the Avengers.  He unleashes a bomb tied to him in a suicide vest in the hopes of killing Captain America but the Scarlet Witch moves him into the sky where the bomb ends up hurting civilians.

Crossbones is seemingly killed in the explosion.

From the Vault: Captain America #359 first appearance of Crossbones