Hellblazer Bio:
When Constantine runs away from home at the age of 16 he is delighted to find a roomate named Chas.  Chas at the time is living with his terrible abusive mother, Queenie and evil, magical Chimpanzee.  Chas and John form a close bond and eventually Chas tells John the story of his mother.  His brother was hung for a crime, and shortly thereafter Queenie killed his father.  Queenie being something of a low level witch conducted a seance that created a familiar which was the evil Chimpanzee.  Both his mother and the evil chimp were determined to ruin Chas's life.
John creates a plan to kill both the chimp and Chas's evil witch mother.  He seduces the chimp and lures it to the docks where he drowns it.  The life force of the familiar being tied to Queenie if one died then both died so the death of the chimp also kills Queenie.  Chas is grateful for John for taking care of the family curse and becomes his loyal right hand man.

Chas provides muscle, his car, and often and insane degree of loyalty and bravery to the adventures of John Constantine. 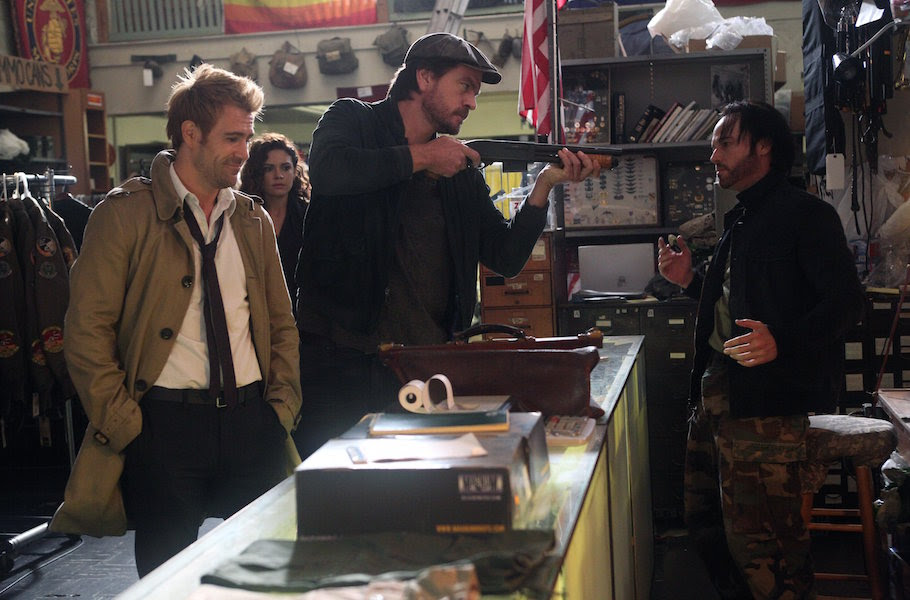 Chas is appears on the Constantine TV show where similar to his comic counterpart drives a cab and his John Constantine's oldest and closet friend.   He is shown as having a form of supernatural healing that makes him even more staut of a companion.  It is revealed that Chas recieved this healing ability from a protection spell cast on him by a drunken Constantine.  The night the spell was cast Chas was caught in a night club fire in which 47 other people died.  These 47 souls were absorbed into Chas allowing him to die 47 extra times.

Chas prior to the finale is on life #3
Related:
Constantine TV-Series Hub - News, Promos, and bios
Who is John Constantine?
on August 14, 2017