Who is Captain Cold? 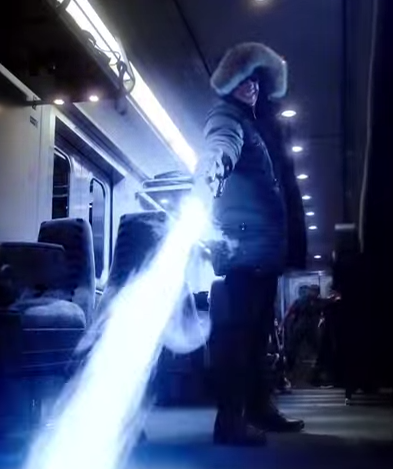 Who is Captain Cold?
Captain Cold is one of the primary villains of the DC hero the Flash.  He is the leader of a group of super villains known as the Rogues.

Leonard Snart grew up in an abusive home.  For a time he found some degree of security with his grandfather who worked in an ice truck.  Things went from bad to worse when Snart's grandfather died and he lost his refuge.  Having an Ice Truck as a refuge is some obvious foreshadowing toward Snart's ice cold future.  Unable to deal with the continued abuse from his father he ran away from home and became a low level criminal.
He begins to lead a group of thieves that use a visor and a gun.  The visor will remain a fixture for Snart's costume for years going forward. Snart was well organized, and smart about how he set up his crimes but he failed to take into account the Flash.  The group of theives was thwarted relatively easily by the Flash and apprehended.

When Snart was released he began studying the Flash.  How fast he ran, how he could be stopped etc.  During his investigation he came across an article that cyclotron based energy emissions could potentially slow the speed of the Flash.  The cyclotron effects effectively alter the movements of particles.  He built a gun designed to cyclotron effects and broke into a lab for one last component.  In the lab he adds the component but is surprised by a guard who he blasts with the gun.  His intention was only to startle the guard but the blast froze the guard.  It was actually able to freeze the very moisture in the air.  Snart learned he was able to bring about temperatures all the way down to the near mysthical absolute zero.

Happy with his discovery he added a Parka to his costume and began using the name Captain Cold.  He became a mainstay adversary of the Flash conducting various schemes that put the city in jeopardy.  During one such mission he is a competition with the villain Heatwave on who can cause the most mayhem in a crime spree.


Eventually, Captain Cold creates a group called the Rogues.  The Rogues is a group of villains that join forces to commit crimes and to attack the Flash.  As leader of the Rogues Captain Cold is very disciplined and authoritarian.  He opposes senseless violence and uses a strict no-drugs rule.  Any rogue who breaks the rules is severely punished.

Skills and Powers:
Captain Cold is not meta human but is a very skilled organizer and tactician.  He also understands the cold technology he uses as a weapon.

Using Cold technology Captain Cold has been shown:
Has a freeze gun that can freeze temperatures to the point where moisture in the air becomes ice
Can create ice on the floors, walls etc to various effect
Can create Icicles and traps using the ice
Can use a widebeam freeze ray that can slow everything in its radius

Related:
All Flash news, characters, and speculation
on July 17, 2016