Who are the Wolves 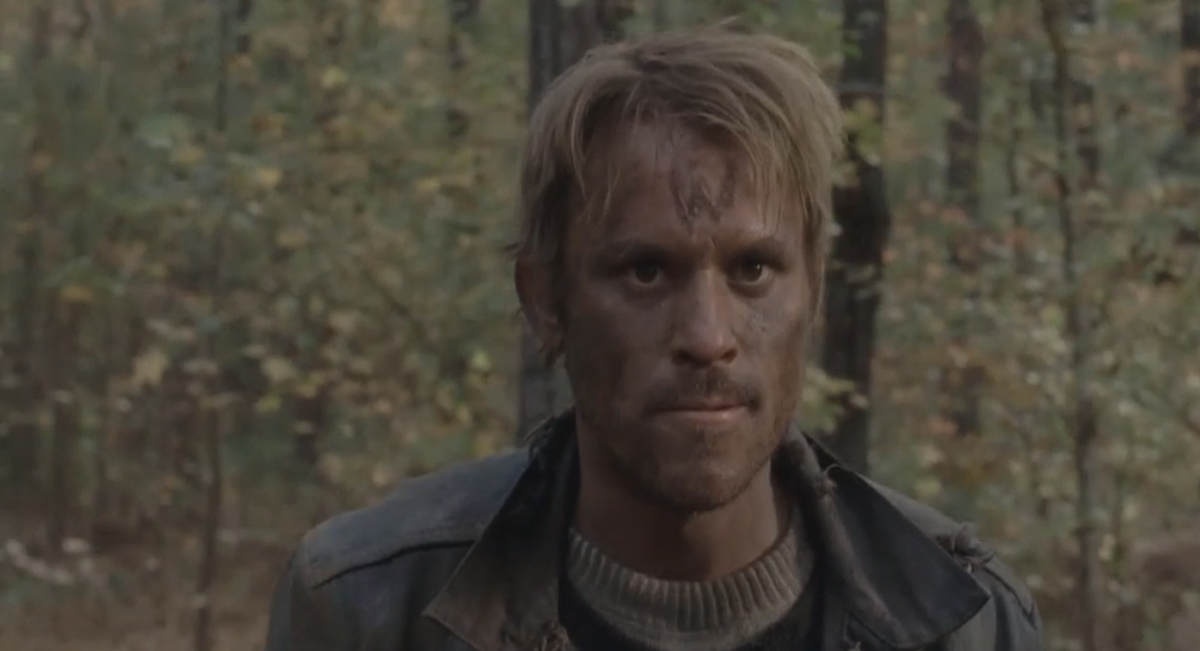 New Speculation on the Wolves!
I have done a lot of speculation on who the current adversaries known as the Wolves are.  Do they relate to a group from the comics or are they totally different.  What is clear is that series has been building toward a confrontation with the Wolves for sometime.  In Episode 2 of Season 6, Alexandria itself is attacked by the group and a few more interesting tidbits are given.

To me these are both evidence that the Wolves are a pawn.

#Wolves have no guns, have no choice? Why? Someone is using them. #walkingdeadquestions #TWD
— Toylab (@ToylabHQ) October 19, 2015

This may also explain why there is so much graffiti around that warns of the Wolves presence.  Someone wants people to be afraid of the Wolves.  Why?

To me the most logical conclusion I can draw is that somehow the Saviors are using the Wolves to go out and scare people.  Once a community is attacked, brutalized and scared by the Wolves, the Saviors move in.  The Saviors then offer protection from the Wolves and undead for a % of resources.  If refused the Wolves and Saviors attack destroy the community and blame it on the Wolves.
The Saviors themselves very likely have lots of guns.  The Wolves conscripts are likely crazy people and or people being coerced through hostages to savage other communities.


Old Speculation:
Who are the Wolves?
In the Season 5 midseason premiere, "What Happened and What's Going On" the group goes to Noah's home in Richmond.

The leader of the Wolves may be a a man called Alexander Davidson. A former refugee at Alexandria.


Related:
The All Things Walking Dead HQ
Who are the Saviors?
Who is Negan?

The group finds that the walled community that Noah called home was brutally destroyed.  There are signs of mutilation, burned bodies, heads with bashed in heads etc.  It was very clear that whoever destroyed the town was humans and not zombies.  As the group leaves the town they also come across a bunch of headless and armless torsos.  Many of the cut up people are then found truck stuffed in there as animated zombies.   The heads of the victims also all appeared to have a "W" carved in their heads.

Well it is possible that it was done by any group but the episode contained tiny clues that pointed toward a group known as the Scavengers or potentially the infamous Saviors.

What's with the Ws?

The Ws are a bit of the mystery as they were obviously carved into the heads for a purpose.  There are few ideas floating around on this:

W=Wolves
It seems very likely that it stands for Wolves as there are other clues of a group calling themselves that.  There is graffiti on a wall with the words:  Wolves Not Far.

There is also a house/shack with graffiti mentioning a group called the Wolves. 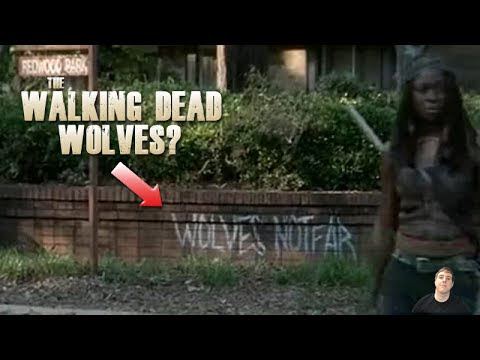 Why the Wolves could be the Scavengers? 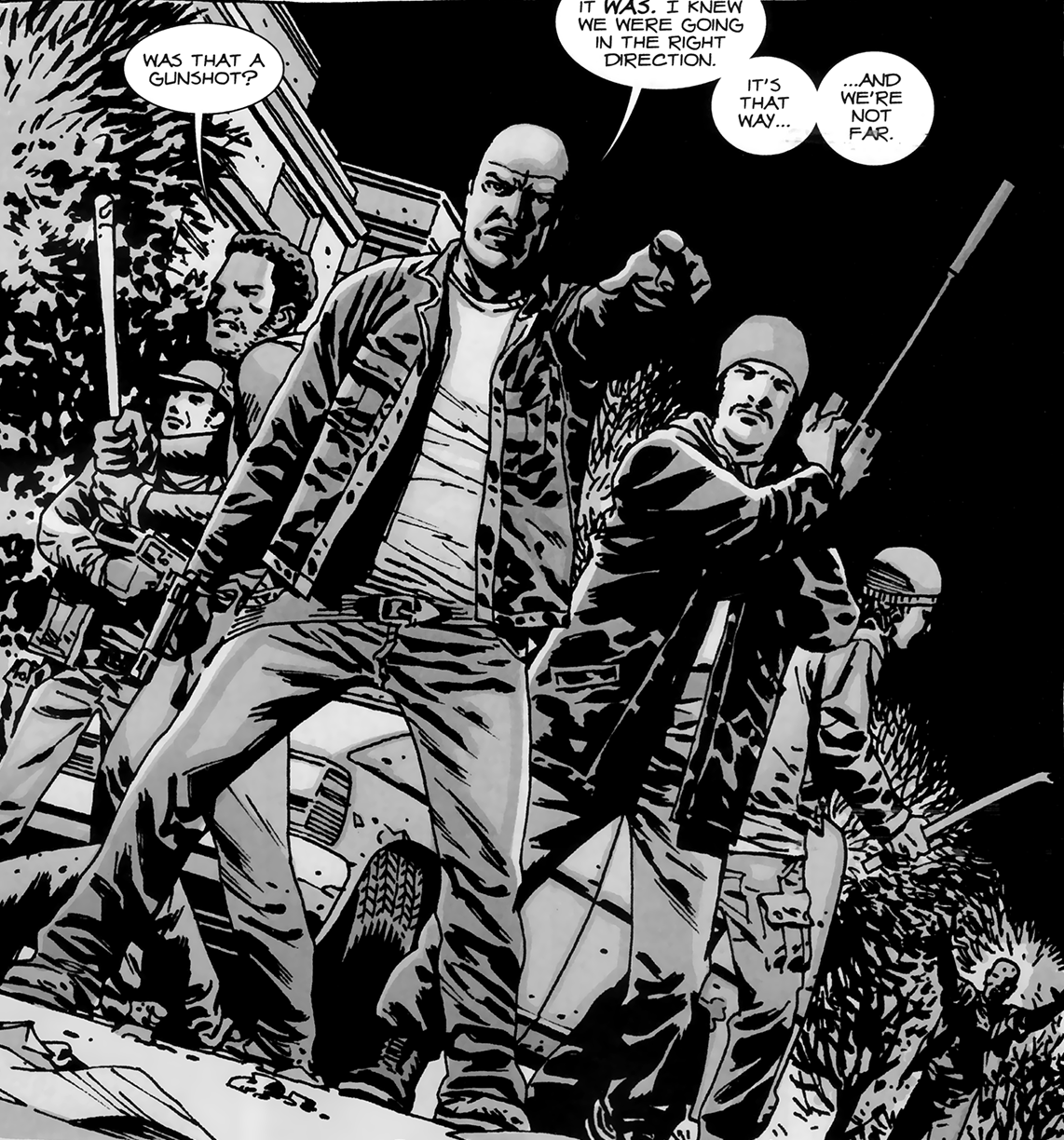 The Scavengers are a group that attacks communities and roam around with a true home.  They see and follow Glenn who is on a supply run back to Alexandria.

When they confront Alexandria their leader Derek says:

"Little pig, little pig, let me in"
These are the same words of the Big Bad Wolf in the story the Three Little Pigs.  This line would seem to point to them being called the wolves.

The Scavengers don't last long, the sniping skills of Andrea make very quick work of the rather small group.  The big point of the Scavengers is showing off the martial capabilities of Rick's crew and the relative weakness of the Alexandrians.  It is from this point on that Rick is given control of Alexandria.

There are not many Scavengers in the comics and I expect the TV show will make them a bit larger and more fierce.

Why the Wolves could be the Saviors?
The Saviors are pretty famous in the comics for being one of the best organized and most brutal groups that Rick comes across.  They run a protection racket where communities either pay them resources for protection or they are brutally destroyed. The general act of killing and sadistically killing a community does fit their m.o.

There are some other clues:

Noah's mother appears to have had her head smashed in with a baseball bat.  This is one of the favorite ways that Negan (Leader of the Saviors) likes to kill people.

The other mutilation of the bodies seems to fit with the Saviors as these guys are sending a message to other communities.  Bow down to us or else.


My finale take:
The timing of where the series is would lead me to believe that the Wolves will turn out to be the Scavengers.  However, the foreshadowing with the baseball bat does not fit with this theory.  Perhaps we see Scavengers morph into the Saviors after their battle with Rick.  The baseball bat could also have been nothing but a red herring to throw off observant fans.

The All Things Walking Dead HQ
Who are the Saviors?
Who is Negan?
on October 18, 2015