What is the Sanctum Sanctorum - Doctor Strange's Magic Mansion 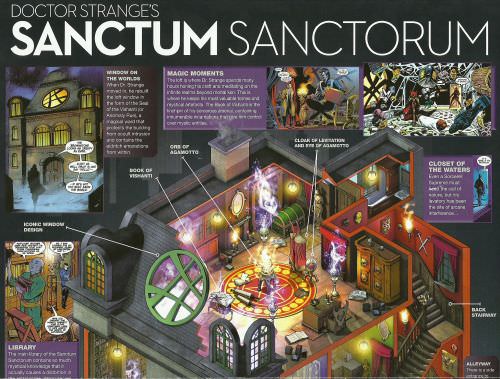 The Sanctum Sanctorum is the name that Doctor Strange gives his magical mansion.

The Sanctum Sanctorum is a three story town house located at 177A Bleecker Street in the center of New York's Greenwich Village.  Stange's man servant Wong is usually on hand to greet any guest to the home.  The Sanctum Santorum is expected to make its first appearance in the film Doctor Strange.

Large window in the pattern of the anomaly rue which is a magical algorithm.  This is said to be "Window of Worlds" or the seal of Vishanti a power symbol of protection.  The symbolic Window has survived the homes destruction and appears in every iteration of the home. 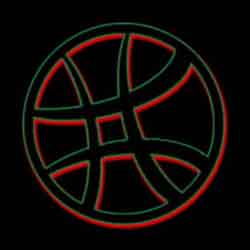 Items stored in the Sanctum Santorum:
Cloak of Levitation- Allow Strange to fly.

Eye of Agamotto- Strange's most powerful artifiact.  The eye negates evil magic and many other things

Orb of Agamotto - A crystal ball used for Strange to gaze into and see various things including into other worlds.

Lay out of structure:
The house also appears at times to have vast spaces open inside of it. That seem to be far larger than the outside of the house would indicate.  This would seem to be magically induced.

Basement- Storage, Furnace, Laundry
First Floor - Large Living rooms, dining rooms and a library.  The kitchen is shown to have a chained up fridge from the dangrous and bizarre foods that Strange is forced to eat to keep his strength.
Second Floor- living quarters/ bedrooms for Strange, Wong and guests
Third Floor- A temple like structure that is called specifically the Sanctum Santorum, includes meditation rooms, museum of magical artifacts, the anomaly rue window, and an occult library

Illusion - The home can hide itself with illusions such as appearing to be a construction site or a derelict house.  It possesses a variety of protective shields and forces inside the house to keep bad things or at least unwanted guests out.

Items that can be seen: