The End of the Spider-Verse a full review 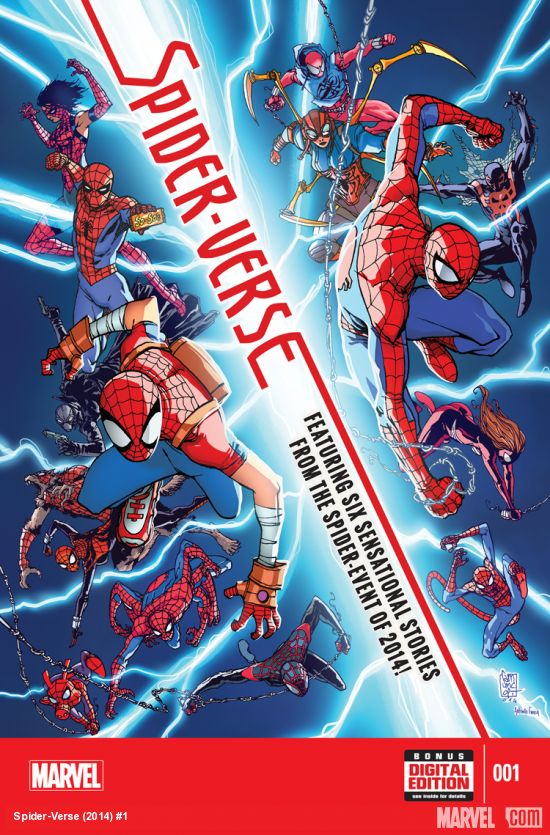 The Spider-Verse event may very well be remembered as Dan Slotts Magnum Opus.  This being the largest, most well known and influential work of his career.  The event was bold conception, and beyond that well executed.  Many have criticisms of it, and I will touch on some of those later but first a well deserved applause for Dan Slott and the rest of Marvel's Spidey team.  This was truly an epic event, full of amazing characters, great stories and an insane spectrum of fantastic art.

I am serious this event was that good!

Tangent Note:
Dan is also one on of the few guys on the Spider-Man team whose signature I am missing.  Dan if you read this come out to Denver Comic Con please!

I will go into some critism of this event but first I am going to give it a grade:

Toylab's grade for the Spider-verse = A+

The Sheer Number of Awesome Books!!!
Lets look at few of the aspects that made this event so inspiring.  The first thing is that this event had a ton of material.  A lot of the new material was also not from pre-existing books but were new series designed especially for the series.  Check out the checklist below it is a lot of books to pack into 3 month series.  What is really crazy is that for the most part all of them maintained a high level of quality.  There were non that I considered all out duds. 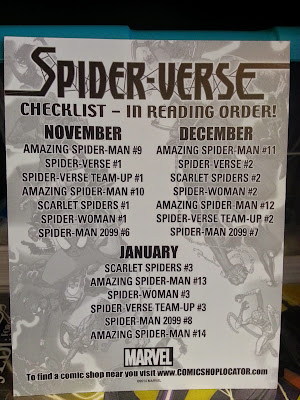 The new and old characters were all given room to shine during this event.  Some of the characters were long lost ones that were dusted off and had new life breathed into them.   I'm looking at you Spider Ham.  Old favorites like Superior, Ben Reilly, Kaine, Spider-Woman and Spider-Man Noir were brought back with a new mission and it was fun to see them all interact.
All of that was good but I think the series will really be remembers for creating all new characters like ...Spider-Gwen and a multitude of other Spider-Man.  (My other favorite Anarchy Spider-Man)

The Inheritors were freaky, they were worthy of this army of Spider-Men.  Down to the end the Inheritors seems like a challenge for the Spider-Men they never felt like push overs.  Each Inheritor had his own creepy vibe to him.  What I really liked is just as you thought they could not get worse then the series shows Solus the Inheritors father in action.  Solus ranks right up there as one of the greatest Spider-Man villains of all time.  The dude freaking ate a Cosmic Spider-Man for breakfast......sadly I actually meant that literally.

The Story:
The overall story of this massive event seemed lost at times beneath all of the epic craziness but when you step back and look at it, this is really a collection of stories.  Telling the story of the Spider-Verse is a bit being asked to tell the story of WWII.  There are battles here, and battles there, and combined it makes this massive arcing tale.  This story is primarily a war story / hero story.  There is not a great deal of romance, or comedy in the Spider-Verse it is a rather dark and violent story as far as Spider-Man goes.  The overall concepts from the characters, the great web, the teleporting between worlds, and this growing Spider-Man army contained a ton great sci fi and superhero elements that were elegantly woven together.  I can't really say I have read anything that quite compares neatly to this story.  Its unique, its powerful and more serious than we normally get from Spider-Man.

Some Criticisms:
As I said before the story was not perfect and I have noted some flaws in it.  As have others.

My main criticism is that it seemed like it took Peter Parker too long to really take charge and show why he was chosen to lead the group. For a bulk of the tale Spider-UK, Ham and Superior do a far better job at organizing the Spider forces than Peter does.  That said this criticism is muted in the story's ending.

I think the biggest criticism of the Spider-Verse event is that it had too much death.  There were so many Spider-Men dieing in some of these books that I literally had to make a list to keep track of all the casualties.

This is different than most Super Hero stories.  Normally, death is rare and is treated as a big deal.  In this story people just died, boom, next page.  The characters in the story did not have time to sit around and weep, there were no big sad funeral scenes it would just off to the next page.  In some ways the Spider-Verse could be considered to be more caviler with death than other series like Game of Thrones and Walking Dead which have become famous for killing off characters.

The death makes the series feel uneasy as a reader.  You know that your favorite characters can perish at any moment.  When they do perish you know that their will be no big funeral scene it will simply be bam bam boom off to the next scene.

I think the criticism that the series trivializes death is fair.  However, I do think that war is terrible because in its essence it trivializes death.  That is what War really is, death trivialized.  Maybe this was not an oversight by the writing staff but a purposeful point. War is terrible.  Personally, I prefer War to be shown in this way as this terrible but necessary evil, with great risk, and great cost than something that simply glorifies it.

Overall:
My overall point is that the Spider-Verse is one of the greatest Spider-Man events ever, it will be remembered for a long time, it will effect things for a long time.  It is big, it is huge and it is important.  If you did not read it, then be sure to pick up the Trade Paperbacks when they come out.  You will not be disappointed.