Raina is revealed in poster of Agents of SHIELD

My take:
Everyone wants to know if Raina will be a character from the comics or a new character on the show.  One of the ideas is that Raina could be the character Tigra.
I think the idea that Raina is Tigra is really out after seeing this.   That is not Tigra.

What will Raina become? 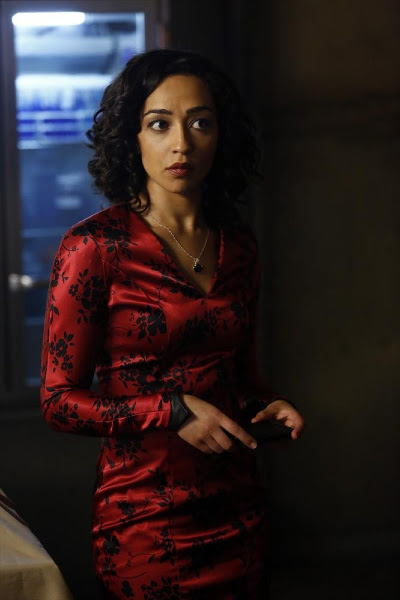 Aftershocks Official Synopsis:
After discovering an alien city with ties to his resurrection, Coulson and his team destroyed it before the forces of Hydra could claim its secrets, eliminating the villainous Whitehall (Reed Diamond) in the process. But new threats to the world have arisen, including Skye's father, Cal (Kyle McLachlan), who now seeks retribution against Coulson for stealing his revenge against Whitehall; a disturbing alliance between former S.H.I.E.L.D. agent Ward (Brett Dalton) and Agent 33; the enigmatic Raina (Ruth Negga), who struggles with her transformation into something inhuman by the alien Obelisk and seeks vengeance; and Skye (Chloe Bennet), who developed mysterious new powers from the Obelisk but whose lack of experience with her new abilities may threaten the safety of those she loves.

Meanwhile, Bobbi (Adrianne Palicki) and Mack (Henry Simmons) begin the next phase of a plan which seems to have grave repercussions for Coulson and his team, who are unaware that there's another mysterious force moving against them. And as Hunter (Nick Blood) is forced to make the biggest choice of his life, Coulson will find his mission threatened by this shocking endgame.

In the midseason premiere, "Aftershocks," Coulson's team must deal with the consequences of their war with Hydra as shocking revelations threaten to tear them apart, and Hydra makes a dangerous move that may involve a traitor in S.H.I.E.L.D.'s midst.

Agents of SHIELD - Hub of News and Speculation!

What will Raina become?

Email ThisBlogThis!Share to TwitterShare to FacebookShare to Pinterest
Labels: Agents of Shield, Agents of shield what will they become, AOS, become, poster, Promo, Raina, Skye, teaser, Transformation, What is, Who is