The survivors led by Rick and I should say Michonne are walking into Alexandria Safe Zone.  What will they find there?
If it is a safe place how will they fit in?  Can they let go of the terrors of the road or are they too damaged?
I expect this episode is going to focus a lot on Rick and Carl.  Carl is a kid who has been through a ton, he was pretty jaded all the way back at the Prison imagine him now.   There are kids who have lived fairly normal lives in the safety of Alexandria how will he fit in with them.

A few thoughts on last nights episode the Distance:
A lot of people might criticize this episode for their not being enough action or death.  Personally, I thought it really mined the core of this interesting predicament they find themselves in.  They want to find good people, but to do that they must trust someone, but how do you do that?  How do you trust after meeting groups like Woodbury, Slabtown, and Terminus?
The group in the end decided to trust Aaron, very much at Michonne's behest.  Michonne really led the group in analyzing the actions of Aaron and sorting out that he was different.

Pictures of the Alexandria Safe Zone.  I think Aaron's pictures helped some.

I liked the scene with Abraham driving where he was optimistic they were going to make it. 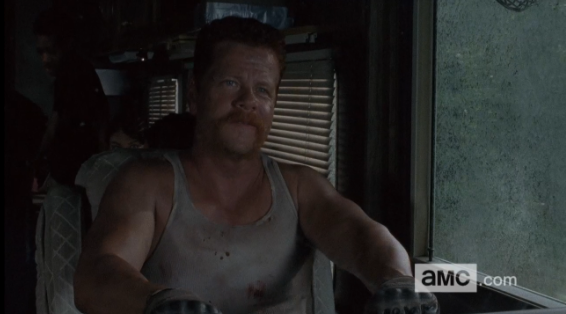 The sounds of kids laughing and the look on Rick's face was a really cool moment.  This tough, bearded warrior carrying his baby to the gates wow.  Sometimes this show just veers toward this place where its almost surrealistic yet it is also so grounded into the story and the characters that it just hits you.

Official Episode Synopsis:
The group has a difficult time moulding to a new lifestyle, forcing them to consider whether they can be the people they once were.

Related:
The All Things Walking Dead HQ
on February 23, 2015