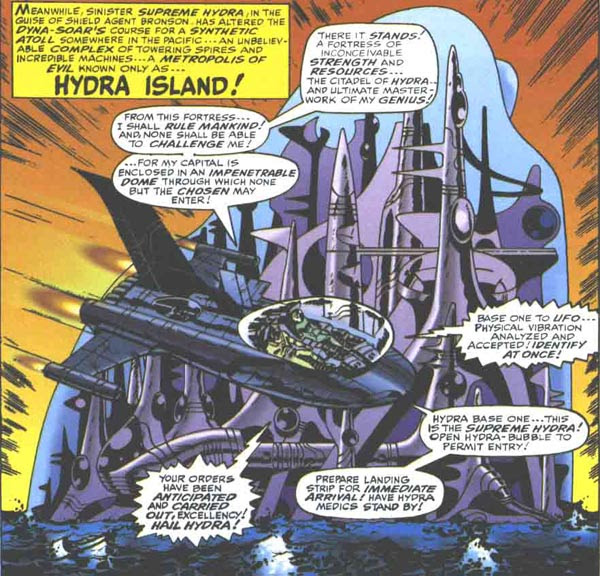 Hydra Island is a base used and created by Hydra head Baron Von Strucker.

Related
Earth in the Marvel universe
Hydra Cribs
Hydralab posts - The Only freaking posts you should care about!


Description:
Hydra Island is a large Island near Australia that houses a Hydra base.  The island was full of a variety of booby traps.   The traps included: land mines, holes, and poison darts.
The Hydra base itself included labs, a prison, communications, control rooms, and a submarine pen.

WW2:
The island was infiltrated by Captain Savage and his Leatherneck Raiders during WW2.  Baron Von Strucker is forced to detonate a bomb that destroys the island rather than allow it to fall into allied hands.

A new Hydra Island is later created. This is a much larger more technology advanced island than its predecessor. This is during the time he hides his involvement in Hydra with a front called THEM.  This organization is beaten by Nick Fury and SHIELD.

Related
Earth in the Marvel universe
Hydra Cribs
Hydralab posts - The Only freaking posts you should care about!
on October 06, 2015