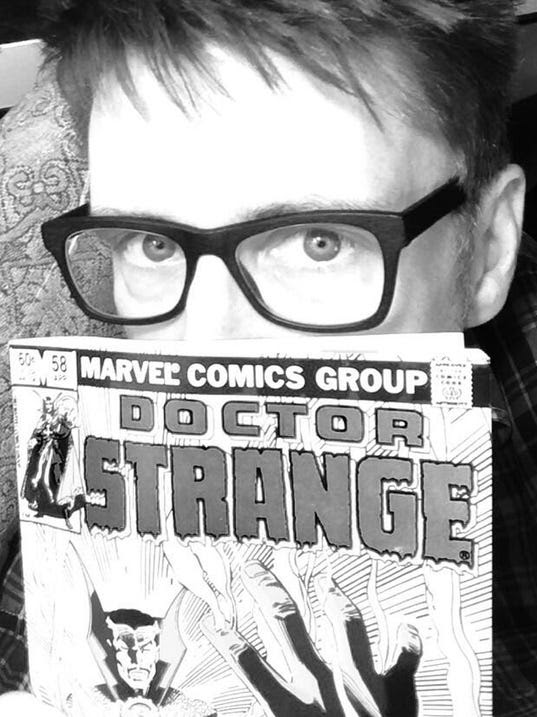 Scott's Derrickson is working on a few projects that I am very interested in.   A film version of the Outer Limits, The Breathing Method by Stephen King, Deus Ex and of course Doctor freaking Strange.  To those who don't know, Scott Derrickson is set to direct the Marvel film Doctor Strange.  The film will bring the Sorceror Supreme and the entire magical world of Marvel to life.
I also saw him him at a little film fest in Denver at the Alamo Draft House and thought he was cool.  Cool in a very geeky way,  you know, the way I am cool.

Long story short, I have begun following Scott on twitter.  Honestly, I have been hoping to find a piece of concept art or some little tiddly bits on Doctor Strange.  This I have not seen much of other than:

However, there is a ton of interesting stuff on his twitter feed.  There is a lot of items torn from theology and philosophy which  are very interesting because this is the guy who has been tasked with explaining the esoteric magical worlds of Marvel and grounding such that it can exist side by side with Captain America.  Not an easy task.  Scott though seems to have a very good handle on this as his tweets mix musings from atheistic poets to religious teachings.  He is clearly a ponderer, a thinker, a lover of the big, deep thoughts.

One thing I think you can begin to see is why Marvel hired this guy for Doctor Strange and perhaps it gives you a glimmer of his thought process.

Here are some of his esoteric musings:


"Remember that you are dust, and to dust you shall return." pic.twitter.com/b8wI22PUSA
— Scott Derrickson (@scottderrickson) February 18, 2015

And right action is freedom From past and future also. - T.S. Eliot, The Dry Salvages
— Scott Derrickson (@scottderrickson) February 18, 2015

Not when truth is dirty, but when it is shallow, does the enlightened man dislike to wade into its waters.
— Nietzsche Quotes (@FNietzscheQuote) February 18, 2015

"I believe comics are a last link to an ancient way of passing on history." - Mr. Glass, UNBREAKABLE
— Scott Derrickson (@scottderrickson) February 17, 2015


Gonna change my way of thinking, make my self a different set of rules. Gonna put my good foot forward and stop being influenced by fools.
— Words By Bob Dylan. (@_WordsByBob) February 21, 2015

"The cares of this world, and the deceitfulness of riches, choke the word, and it becomes unfruitful." pic.twitter.com/3NNriiIoV1
— Scott Derrickson (@scottderrickson) February 23, 2015

"You shall know the truth, and the truth shall make you odd." - Flannery O'Connor #FREAKS #TodBrowning pic.twitter.com/OsVZ19MRMR
— Scott Derrickson (@scottderrickson) February 13, 2015


“Long is the way and hard, that out of Hell leads up to light.” ―John Milton, Paradise Lost. Engravings: Gustave Doré pic.twitter.com/uj1PlUqcbs
— ✍ Bibliophilia (@Libroantiguo) February 7, 2015


"The only place outside Heaven where you can be perfectly safe from all the dangers and anxieties of love is Hell.” - C.S. Lewis
— Scott Derrickson (@scottderrickson) February 6, 2015


Alright that makes for a pretty heavy cocktail of thought so lets lighten it up some.
There are also some fun things on there like this: