Judgement Day is a story that was planned to be printed in 1953 and is a natural starting off point for Black History Month.  Blacks and African Americans had been featured prior to this 1953 project of EC publishing.  However, before this blacks were generally depicted as exotics, or in the background.  This is the first time that a Black person was featured in the forefront of the story.  What really makes the series even more interesting is the story itself and the battle to get it published.

Judgement Day is a snap shot of American attitudes towards race, politics and publishing in the 1950s.  Personally, I think Clint Eastwood should turn this into his next film project.    It is a great story that features The Good, The Bad, and the Ugly.

The Good:
Meet our heroes!  The guys at EC Publishing.  EC publishing is not necessarily a well known name anymore but they had a big impact on a variety of areas.  You likely have heard of some of their brands like Mad Magazine, and Tales of the Crypt.   They were a small publisher that were known early on for publishing Horror, Weird and Sci Fi comics.  When the comics code authority came out in early 1950s EC was one of the main targets.  One of the areas that EC tried to be on the forefront on was race.  On the topic of race, EC wrote a large variety of stories attacking bigotry.  The most well known story in this genre by far was Judgement Day.

The Bad:
The CCA comics code authority was created because of studies showing that comics and pulps were contributing to the delinquency of youths.  At the time comics became the scape goat for every wrong thing little Timmy, Billy and Betty Sue did.  Parents rallied around this idea that horror and weird comics were to blame and this political movement created the comic book gestapo the CCA.  The CCA banned things like the title Horror and Weird in comics.  They also took to banning things that were seen as sexually provocative, too politically charged, or in the case of Judgement Day something they were uncomfortable with.

(Beware giving people institutions control over what you can say or think. Beware censorship)


The Ugly:
ECC creates a seemingly benign story on bigotry.  An astronaut from an intergalactic republic visits a planet of a sentient robots to determine whether the planet will be allowed the republic.  In the end he decides the planet is not worthy due to the robots bigotry.  The robots you see are divided into two many colors, they live mostly separately with one color dominating the other in the power structure.  This story as is would likely have slipped through the comic book authority albeit uncomfortably however EC was known for inserting a little stinger at the end.  Each ending had a little twist that shocked the reader, and sometimes gave the bad guys their do.


I now give you the shocking, earth shattering ending of the story Judgement Day! 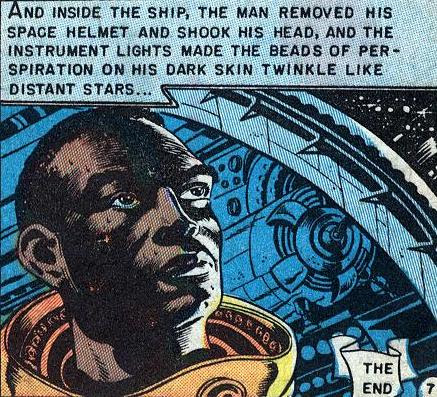 My guess is that most modern readers look at the image above and don't understand why it is so shocking so let me explain.

The astronaut who is judging this planet for being biggoted and thus denying their entry into the republic is revealed to be a Black man.  This would be one of the first times a black person was depicted in a position of authority and here he is not just in authority but also laying down the law as it were.  This to a 1950 audience was ......Shocking.  It was also a not subtle judgement of 1950s America.  The message was pretty clear, if aliens come down to America they are going to look at the country like it were filled with a bunch of biggoted savages.

The CCA  (Comic Code Authority) went ape crap over the story and demanded EC to change it.  Their first request was for EC to make it a non Black person in the Astronaut suit.  EC responded listen up you tyrannical dumb butts that is the whole point of the piece.  Then the CCA was like well can you remove the perspiration that looks like stars on his skin.  Apparently, the fact that stars were shining on his skin made him look too messiah like.  EC fired back hell no.

This conflict goes round and round the CCA aka the big bad Empire basically ends up winning.  EC refused to alter the story in any way.  They completely stuck to their guns.  The CCA refused to give the story their seal, so no stores would buy it.  The CCA successfully taught the little publisher a lesson.  Other publishers fled the space fearing they would too would be banned.  EC for many years would only publish its benign Mad Magazine.  Eventually, though the crazy people who want to blame scape goat art for their problems moved on to music, and later to video games.  As a result to the loss of focus, the comics industry eventually wrested itself away from the CCA stray jacket.  Later, when the major players in the publishing industry like Marvel and DC pulled away from CCA its power basically eroded to nothing.

The story of Judgement Day is full of revealing reflections of attitudes during the 1950s but also of some of the good being done by comic book writers.  Comic book publishers catch a lot of flack for not being diverse enough.  Some of this criticism is warranted.  Publishers though should also get attention for their good things they did.  In this case an entire company fought to get out a social message while under siege of the authorities.  That is by no means a small thing.
on February 28, 2017