Who is Daemos?
Daemos is one of the Inheritors that hunt down Spider-Totems throughout the Multiverse.  He and his family are the primary villains of the Spider-Man event the Spider-Verse.

Bio:
Daemos is part of the Inheritor family that hunts and eats the life force of living things particularly totems.  Totems are animal themed powers.

Daemos is the physically largest and oldest of the children of Solus.  From the prophesy of the Master Weaver Daemos know that he will never become the leader of the family so he devotes himself to gluttony.   Of all the Inheritors Daemos seems to enjoy killing the most.   He enjoys eating, and also potentially sex with Inheritors.  He mentions keeping the non-totem Lady Spider around for "other purposes."

Universe 616 was declared off-limits by Morlun but Daemos is jealous of his brother so he attacks the universe anyway.  In the 616 universe he located Kaine the Other and nearly manages to kill him before he escapes.

The Superior Spider-Man managed to kill Daemos but he was quickly resurrected by Jennix's cloning facilities.  None the less, Spider-Man 2099 managed to take his carcass and began studying it to determine a weakness.

Daemos was trapped with other remaining Inheritors on a radiated world in a vault that he could not escape from. 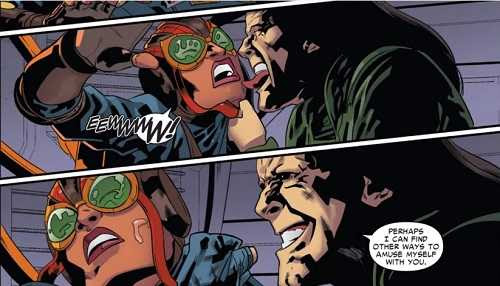 Base:
Like the rest of the Inheritors he seems to be from Loomworld (Universe 001)

Powers and Skills:
Daemos is extremely fast, strong, and durable like the rest of the inheritors.