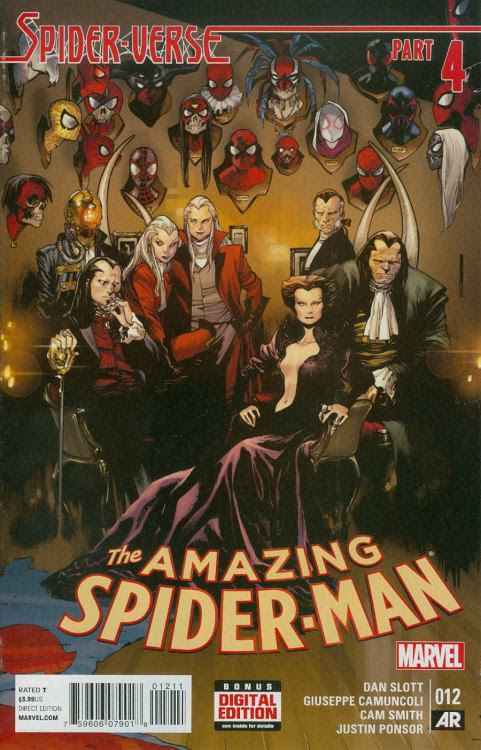 Amazing Spider-Man 12 continues the story of the Spider-Verse.  It has some good moments but it failed to do some important things for me.  The plan seems to be to use the Amazing title to weave together the plot lines from the other Spider titles.  While all of that is interesting it forces the story that is already chalk full of characters to jump around in every page.  There is a large chunk of the book that it almost nothing more than a status report.  I am really hoping we see Peter acting as a real leader and showing what he can do.  So far I have been more impressed with Otto running his team than I have with Peter.
All is not lost in this book, there is still awesome art, awesome Spider characters and a phenomenal moment involving a Japanese Spider Robot.

General Plot:
In the previous book Solus had just killed Cosmic Spider-Man and Morlun had just captured the Scion totem.  The Scion totem turns out to be the youngest totem, little Benji Parker the Spider-baby.  Lucky for Benji he is not killed just taken away.  It seems the Inheritors need Benji for some reason.  With the Cosmic Spider-Man dead the rest of the Spiders are in disarray and are debating what to do.  Some think that Solus may be weakened by the battle with the Cosmic Spider-Man but are disappointed to learn that Solus absorbed the cosmic energy and is stronger than ever.  He easily kills Spider-Knight and almost kills one of the Spider-Females.

As Solus is tossing around Spider-Men in comes the cavalry.  This is easily my favorite part of the book.  Peter has recruited an array of Japanese Spider-Men and among them are the Spider-Man from the Japanese TV-Show where he was the emissary from hell and flew in a giant robot named Leopardon.  Leopardon engages Solus and the Spider-Men use the opportunity to escape to a different world.  I personally think that the battle between Leopardon and Solus should have been multiple pages of glorious, crazy action spreads.  Instead, it is only given about a page, and we get Peter frantically getting status reports from the other Spiders. 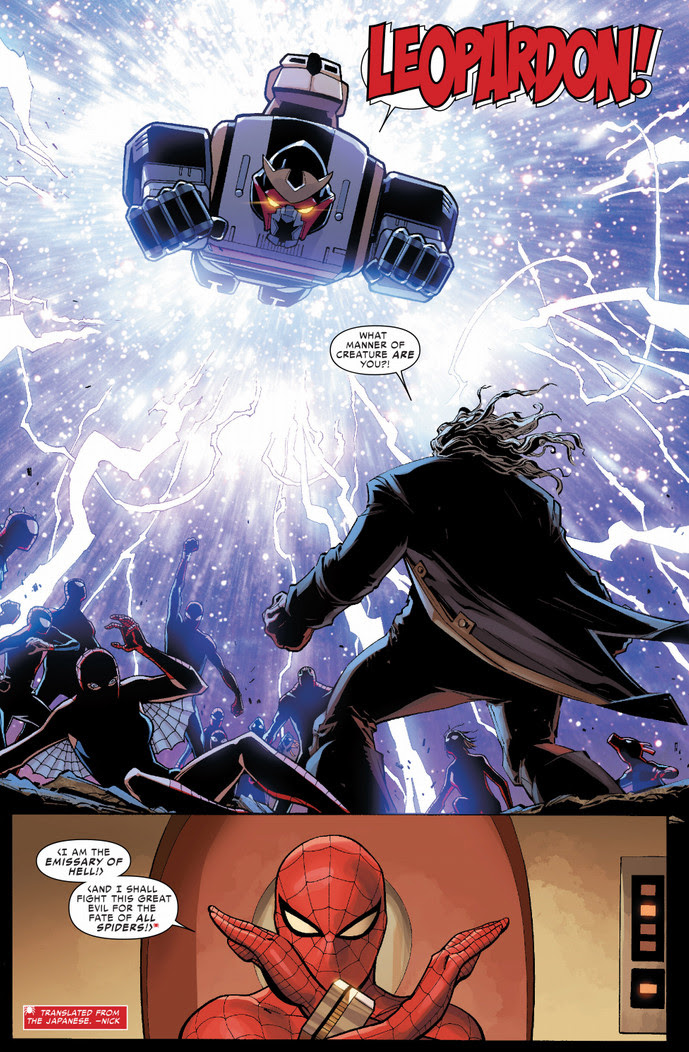 The Spider-Men and Women and Pigs all manage to escape into a random dimension.  The Japanese Spider-Man in the mech manages to escape too but his mech, Leopardon is destroyed.  DOH!

Miles is recruiting other Spider-Men, including one who rides a horse and one with a race car.
Jessica is running around the world of the inheritor posing as her doppelganger, apparently the Jessica of Weever world is Morlun's girl friend.
Miguel (Spider-Man 2099) is working on dissecting an inheritor but he is unable to transmit any tactical information because Jennix the intelligent Inheritor interferes.  He reveals that he has been following their transmissions. He then sends his sister to their location to hunt them down.

Jessica on Loomworld meets with the Master Weaver.  Jessica is given special scrolls that reveal the prophesy and she manages to teleport them to Peter Parker.

Around this time the other Spiders are starting to strongly question Peter as their leader. I really can't blame them he has been a mega dofus so far in the series.  Luckily, he makes contact with Silk who has found a radioactive waste of the world that while very hazardous to them is even more hazardous to the inheritors.  You might recall that the first time Peter defeats Morlun it is by using radiation. I am not sure why it has taken him so long to try using radiation against them.

The Spiders enter the wasteland and are pretty angry at Parker for leading them to a radioactive waste where death is certain.  However, they see Silk's has left nice little arrows made in webbing.
They follow the trail that leads to this universe's version of the bunker where Silk spent years living in.  Inside they meet this world's Spider-Totem who is none other than.....Uncle Ben!!!

The Spider-Totems featured in this book are:
Who is Spider-Man (616)?

Ratings
Story - 2 -  Too much time is spent status report and not enough on some of the more awesome moments on the book.

Action - 3 -  A battle Solus and Zapardon could have been really awesome but was not given enough space.

Extras - 4 -  Zapardon the Spider Robot was pretty awesome and I'm not sure he has ever appeared in comic form before.

Overall -3 - This book features some great moments, but too much time is invested in tieing together the massive story that the great moments are covered over.