Lego Set Peek - Burgalary at the Hydra Fortress - From Avengers: Age of Ultron 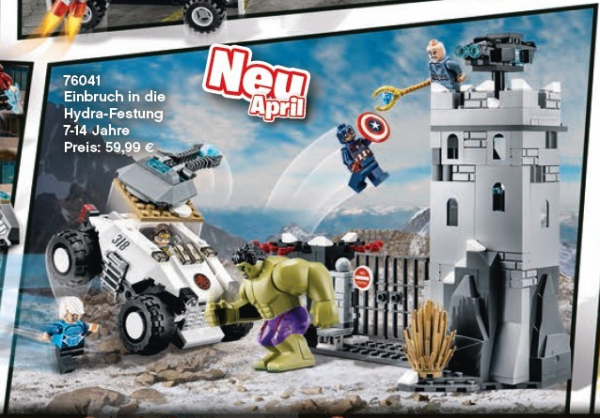 Description:
Not much has been released about this set other than the picture above.  There is quite a bit I can piece together from it though.
This set has the Avengers; Hulk and Captain America breaking into the Hydra Fortress to take/steal the Chitauri scepter.
Hydra henchmen and the super speedster Quicksilver are sent out to stop the Avengers. Meanwhile, the leader of Hydra, Baron Von Strucker watches the battle from the tower of the fortress.

The set includes to big buildable objects.  The first is the Fortress which is a pretty big structure that includes a gate and a tower.  There is also a Hydra car.  Both the Hydra Fortress and Car appear to have cannons with flick-able missiles.


Special Notes:
Appears to be only set with Quicksilver and Baron Von Strucker
This set is the first set to feature Captain America without giving him a motorcycle
This set also has the Chitauri scepter item.  The other set with this item is Avengers Tower


Official Description:
Has not been released: