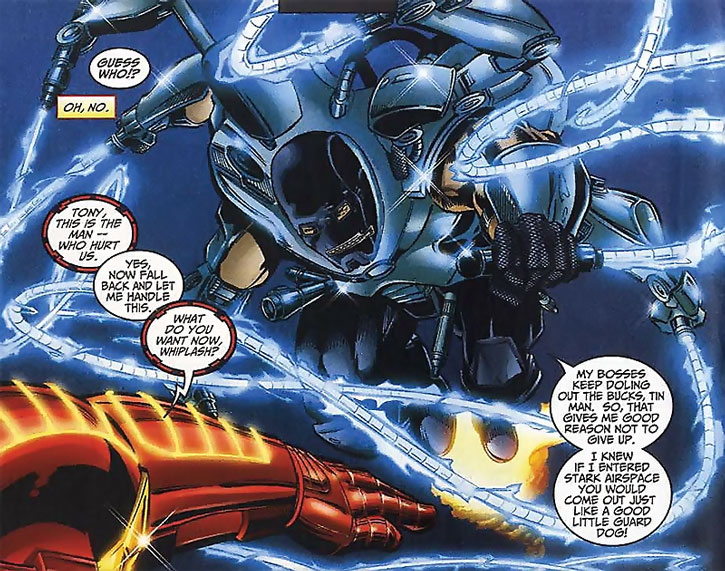 Whiplash is a villain known primarily for battling Iron Man.
5 villains have used the Whiplash moniker.  The two primary Whiplashs that are the most popular are Anton Vanko and Mark Scarlotti.
Both the Vanko and Scarlotti versions of Whiplash have appeared in the MCU.  Vanko is the primary villain in the movie Iron Man 2 and Scarlotti appears as the primary antagonist in the episode a "Fractured House" of Agents of SHIELD.

Mark Scarlotti is an engineer at Stark Industries.  He invents a special whip technology.  Rather than give the technology to his employer  he steals the technology and embarks on a criminal career.  He uses a technologically advanced metal whip of his own design.   Initially, he works for the criminal organization known as the Maggia.  His missions for the Maggia were all thwarted by Iron Man.

Scarlotti joined up with a group of super villains While working for Hammer as a mercenary he is given a special bullet proof vest.  He then goes by the name of Backlash.  The group also includes the super villains the Melter and Blizzard.  They attempt to rob a casino.  Though the group has Iron Man out gunned he still defeats them per usual.

At one point Scarlotti attempts to go legit but after being rejected by his own parents and the people of his hometown he gives up.  He has made numerous criminal attempts over the years almost all of them end up being foiled by Iron Man.  Eventually, Scarlotti is killed by a sentient Iron Man suit that crushes his throat.  This is against Tony's wishes but he is unable to stop the suit.


Marcus Scarlotti is in the Agents of SHIELD episode a fractured house.  He is a mercenary who  been hired to impersonate SHIELD while attacking the UN.  Later he assassinated a SHIELD team.  He is defeated in combat by Agent May.  Scarlotti was taken into custody by the US Military's Glenn Talbot. 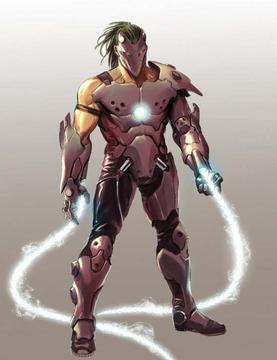 A man steals one of Iron Man's suits flies to a Russian village and kills an innocent Igor Vanko.  Igor's son Anton shoots a gun at the attacker causing the chestplate from suit to fall to the ground.  Anton finds the chest plate from the suit and takes it home vowing to get revenge on Iron Man.   He turns the chest plate into a full suit that powers two energy whips.  Anton then seeks to kill Stark with his new suit.

Stark is being held for the crimes of the man who used the suit.  Anton Vanko attacks him in Prison.  Stark is barely able to survive the fight using various machines in the prison to hold off the assassin.  The two meet again at the head quarters of a secret consortium that had worked to frame Stark.  While Vanko learns the truth that Stark is innocent he does not care.  In his mind the technology that Stark created makes him responsible for the death of his father.   The two battle again.  Both are forced to retreat as the building now on fire collapses around them.

Stark rebuilds the village from the devastation wrought by the attacker.  Anton has been recruited by various super villains to battle Iron Man.

Anton Vanko is played by actor Mickey Rourke.  His name in the film is Ivan Antonovich Vanko.  In this version he is part Crimonson Dynamo and part Whiplash.  His father was not killed by Iron Man in this version.  Here his father was a scientist who also created the arc reactor but was given no credit.  Vanko then seeks to show that Stark is not the only one made this technology by building his own suit using his own arc reactor.
Vanko is apprehended but released into the care of Justin Hammer.  Vanko fools Hammer into believing that he is upgrading the Hammer Industries military bots when he is really just turning them into his own army to use against Iron Man.
Vanko and his bot army are defeated by Iron Man with the help of James "Rhodey" Rhodes AKA Warmachine.

DISCLAIMER: This article was submitted by a volunteer contributor who has agreed to our code of conduct. Toylab is protected from liability under the Digital Millenium Copyright Act (DMCA) and "safe harbor" provisions. Toylab will disable users who knowingly commit plagiarism, piracy, trademark or copyright infringement. Please contact us at ToylabHQ@gmail for expeditious removal of copyrighted/trademarked content. You may also learn more about our copyright and trademark policies.
on May 02, 2019