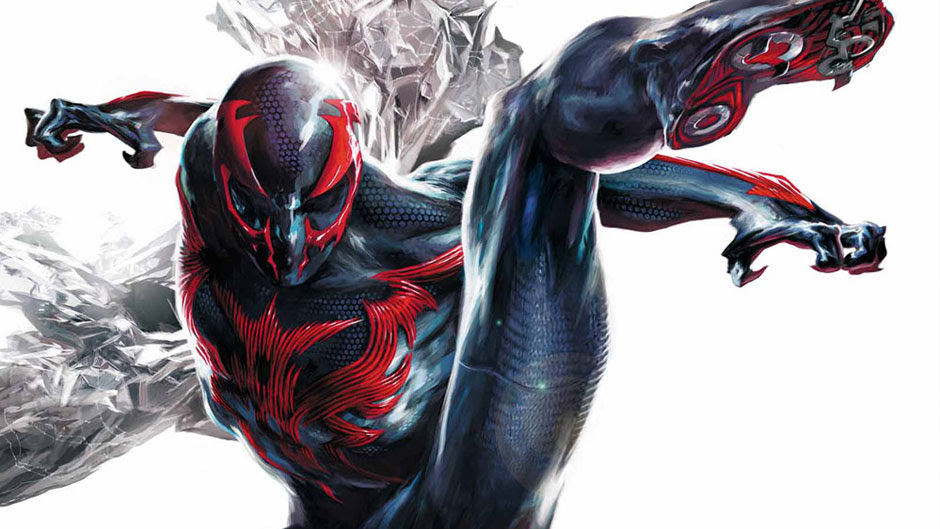 Spider-Man 2099 Bio:
Miguel O'Hara is a genuis child born into an abusive home.  He manages to get a scholarship to a special boarding school Alchemax Boarding School for gifted youngsters (Could be the renovated Xavier's school).  There he meets other gifted kids like love interest and genuis computer programer Xina Kwan.

Miguel O'Hara becomes the lead geneticist on a project to recreate Spider-Man's powers in soldiers.  With the aim of making super soldiers. He is working for the highly corrupt Alchemax corporation.  After the death of a test subject Miguel attempts to quit but is blackmailed to continue by the president of Alchemax.  The president injects Miguel with a highly addictive drug that only Alchemax creates.  If Miguel gets the drug from a different source (Black market) the president will turn him in.

Miguel is a genuis though and hatches a plan to rid himself of drug dependency.  He breaks into Alchemax and enters a machine to rewrite his DNA back to how it was prior to the inducement of the drug.  A jealous coworker sabotages the DNA rewrite and adds Spider DNA to the mix.  Leaving the machine Miguel learns that he now contains 50% spider DNA and has Spider powers like the Spider-Man hero he had been studying.  He makes a suit and begins fighting crime beneath the name of Spider-Man.  One of his prime targets are the huge Mega Corporations that have corruptly taken control of the world.

Miguel has a bit of a bizarre appearance that he must cover up.  He has red iris's that are highly sensitive to sunlight so he is constantly wearing sunglasses.  He also has fangs in his mouth. If he is angered or shocked he can also release his hand/feet talons or accidentally spray his webbing.  He has found a variety of ways of hiding these features.  He is forced to talk almost like a ventriloquist to hide his fangs.

Miguel has now joined with the other spider-totem in the Spider-Verse event.  Miguel sees the Exciles Spider-Man killed by Morlun and leaves to find Peter to let him know about the return of Morlun.

Powers:
Due to his rewritten genetic code with that of a Spider, Miguel has similar powers to those of Spider-Man.
Super Strength, speed, agility, durability.

Faster healing- Not Wolverine fast but much faster than a normal human.

Heightened hearing and sight.  Can hear a pin drop, and has highly advanced vision that can detect movement and zoom in on far off objects.  His vision is very light sensitive so he wears sunglasses to avoid blindness.  Even a normal light can cause him to go blind.

Wall crawling - Has talons that allow him to climb walls on his feet and hands.


Paralyzing Venom - Miguel can bite people and inject a venom that paralyzes his enemies temporarily.

Webbing - Calls his web lines Spinnerets that he uses to travel by web swinging, and to entangle his opponents.

Skills:
He has a genius level intellect and is one of the foremost minds on genetics in the Marvel universe.
No real martial training but develops skills with his powers as he goes along.