Who is Spider Gwen? 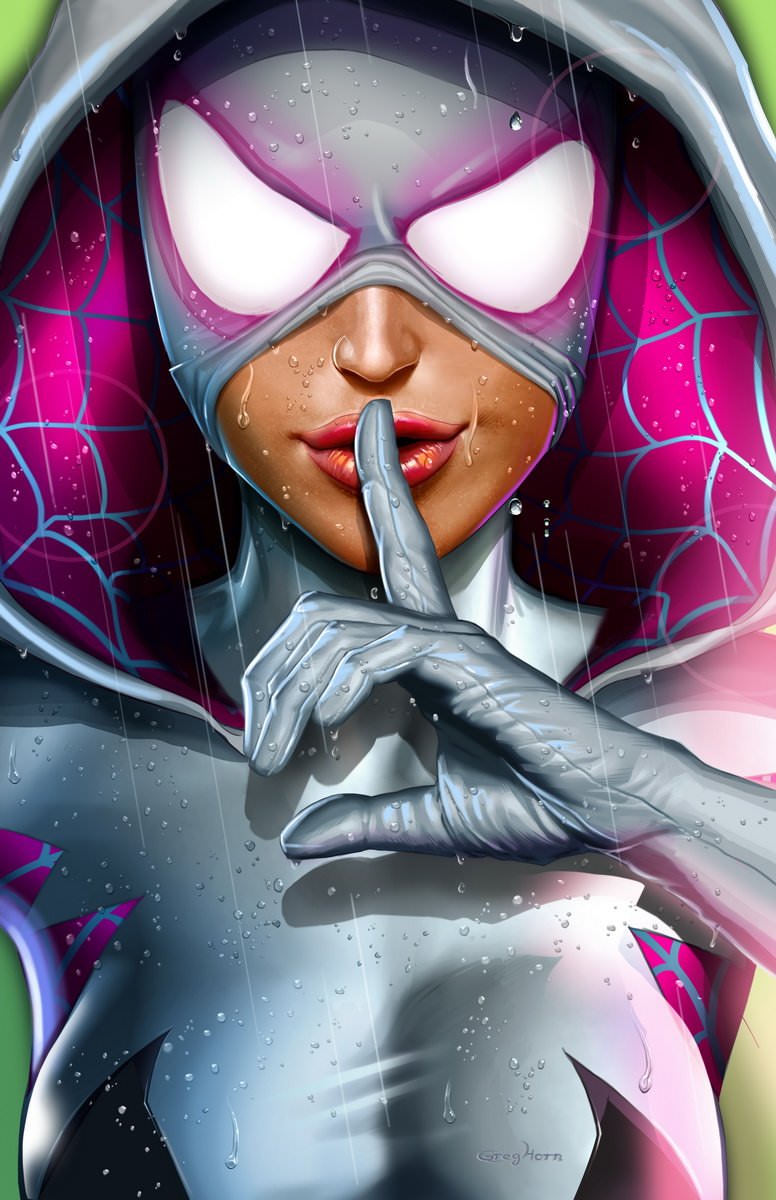 Who is Spider Gwen

Spider Gwen is a version of Spider-Man introduced in the Spider-Verse storyline.  She calls herself Spider-Woman but her character is known as Spider-Gwen.  She is her world's version of Gwen Stacey and Spider-Man.  Spider Gwen seems to be the most popular of the alternate world versions of Spider-Man.  Part of this is due to the fact that Gwen Stacey was an awesome character whose death cut her comic time prematurely short.  The stories of bringing her back using clones have never panned out quite right.  This version brings back the "real" Gwen with the awesome twist that she has Spider-Man's powers.

In the Spider-Geddon event Gwen begins to call herself the Ghost Spider.

First appearance: Edge of the Spider-Verse #2 (See below for details on controversy)

Video Origin:
An origin video was created to introduce fans to Spider-Gwen and catch them up on her story for Spider-Geddon. 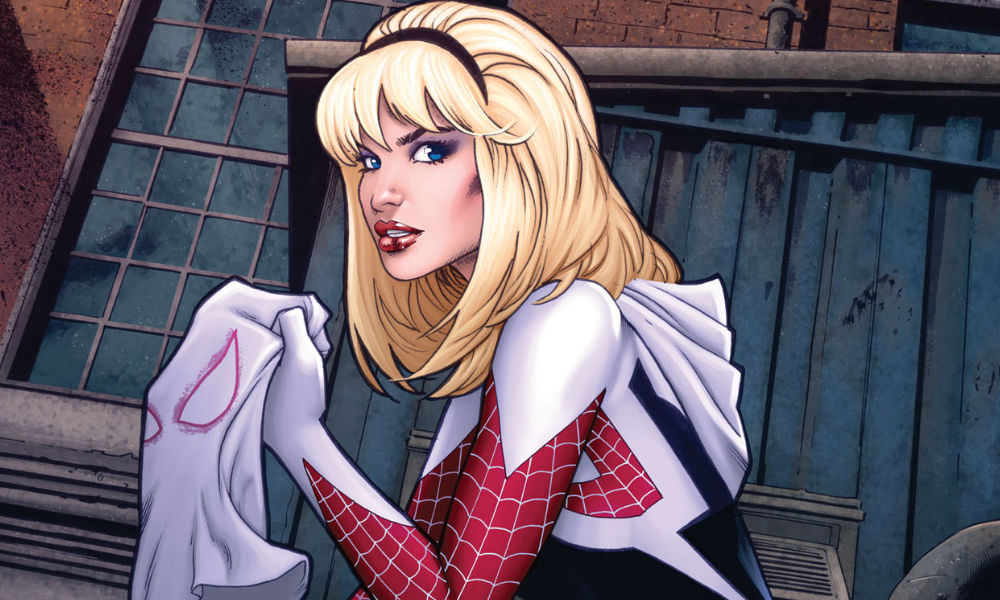 I am not sure what has been decided officially for Spider Gwen's first appearance.  Most sites seem to reference Spider-Verse #2.  However from what I can tell her first appearance is Hawkeye vs Deadpool #0.

Spider Gwen makes a fast cameo appearance in Hawkeye Vs Deadpool #0.  This is a very brief shot of the character.  This is the first appearance I can find of both Spider Gwen and the Female Thor.

Spider Gwen first major appearance is in the comic Edge of the Spider-Verse #2. 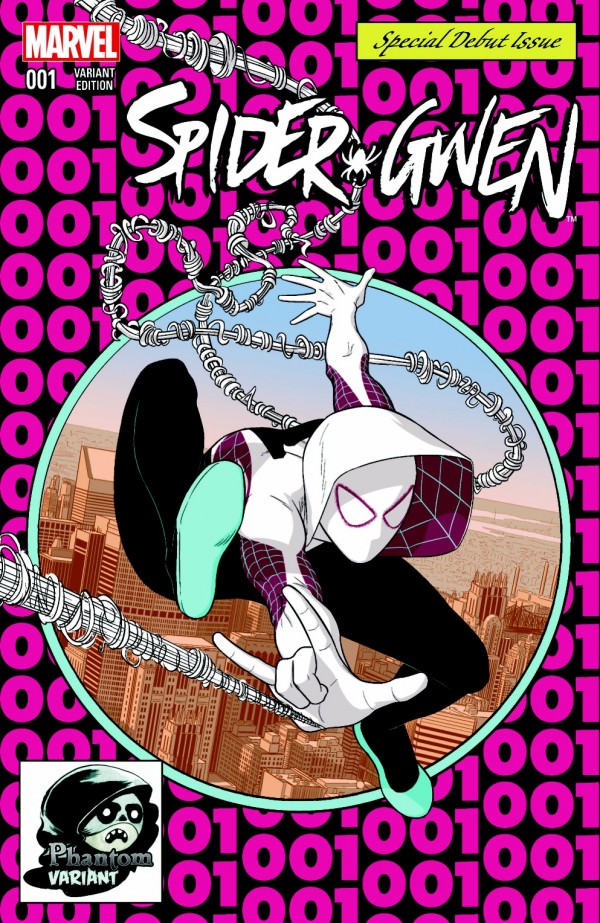 In an alternate universe Gwen Stacey is bit by the radioactive spider and not Peter Parker.  I do not know about Cindy Moon (Silk) in her universe.  Gwen Stacey develops the powers associated with Spider-Man and goes on to become a super hero calling herself Spider-Woman.

She plays in a band that is headlined by Mary Jane Watson.  The band calls themselves the Mary Janes, obviously Mary Jane would name the band after herself.

Peter Parker in this universe is a vindictive genius.  He creates the Lizard formula to exact revenge on those who bullied him.  Gwen manages to capture him, but Parker dies from the chemical he used to turn himself into the Lizard.  J. Jonah Jameson seems to hate Spiders in any universe and calls for Spider Woman's arrest in the death of Parker.  Spider-Woman / Gwen is now hunted down by her father the Police Chief, Captain Stacey.  Around this time an assassin is sent after Captain Stacey and he happens to be attending one of her concerts.  She fights off the assassin but is then held at gun point by her father.  She takes off her mask revealing that she is his daughter.  He tells her to go before he changes his mind.

Gwen is being watched by Spider-UK from Earth 833.  He recruits her to join his force of Spider-totems to battle in the Spider-Verse against the inheritors.

Spider-Verse
She next appears with the spider-totem team rescuing Kaine in the 616 universe from Morlun's older brother Daimos.  She is assigned the job of protecting Silk in Spider Woman#1.

Powers:
Seem to be the similar to Spider-Man.  I do not know if her webbing is biological like Silk or made technologically like Peter Parker's webshooters.

Cosplay:
Spider-Gwen has become a very popular cosplay with her stylish take on the Spider-Man costume. 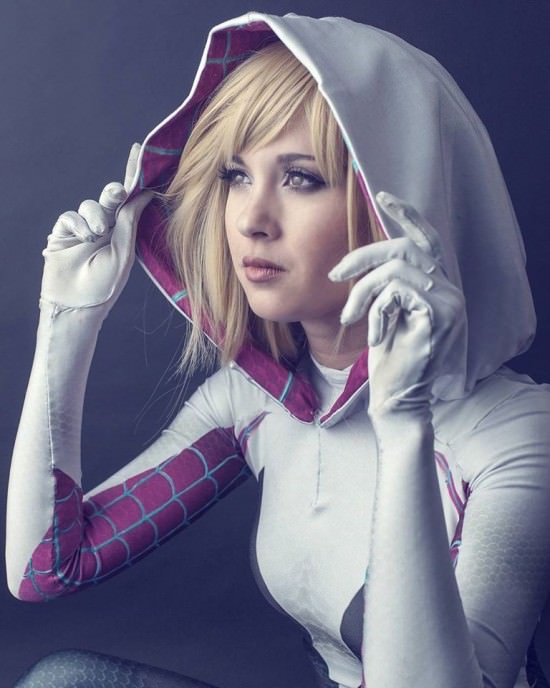 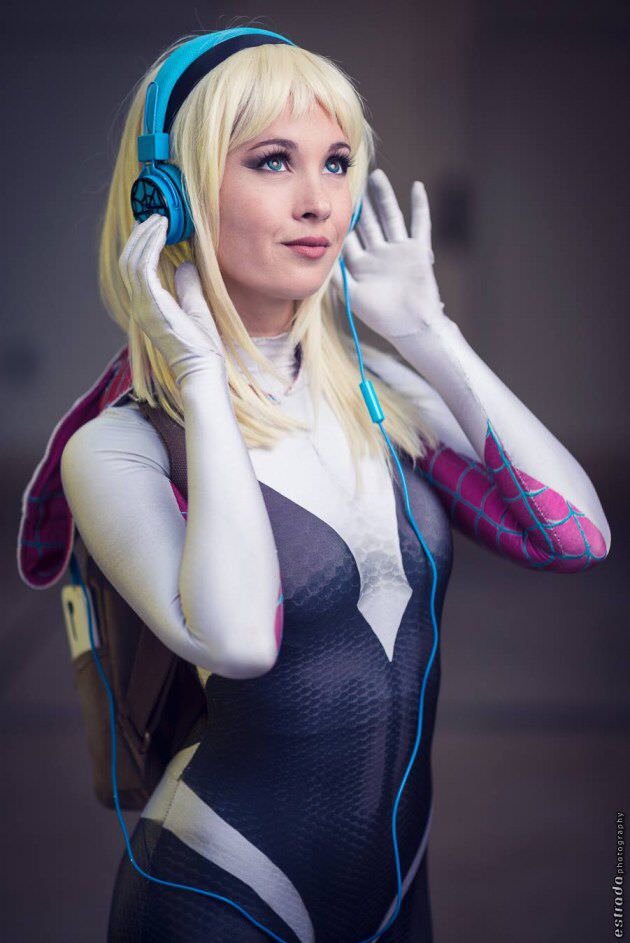 Email ThisBlogThis!Share to TwitterShare to FacebookShare to Pinterest
Labels: #Marvel has released a cool origin video for #SpiderGwen aka #GhostSpider in #Spidergeddon, Marvel