In this story Spider-Man brews up a cocktail intended to terminate his Spider-Powers so he can live a normal life.  Instead, he grows four extra arms.  After battling with the Morbius, Parker with the help of Dr. Curt Connors manage to create an antidote that cure him of the condition. 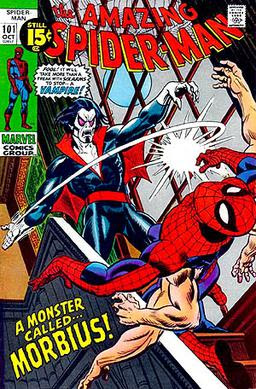 What-If
A story of "What If" plays with the notion that Parker had kept his six arms.  In this world none of the  great scientific minds of the Marvel universe Dr Connors, Mr Fantastic, and Charles Xavier are able to create an antidote.  Spider-Man ends up battling Doctor Octopus where he rather easily takes down the super villain.  6 armed Spider-Man seems to be in many ways superior, stronger, and more agile with his 6 arms.  Within this world he manages to save Gwen Stacey.  Parker ends up accepting his 6 armed situation and becomes even more of a hero.  He is looked as a spokesperson for those with disabilities.  To keep his identity secret Mr Fantastic creates a suit that makes his extra appendages invisible.


Powers:
Same as 616 but with extra arms that make him stronger, and more agile.

Email ThisBlogThis!Share to TwitterShare to FacebookShare to Pinterest
Labels: 6, 6 armed, 6 arms, Armed, Arms, extra, pictures, Six, six armed, six arms, Spider-Man, Spiderman, Spiderverse, Superior, what if, Who is, why, Why does