The previous Amazing Spider-Man #9 brought all of the Spider-Men and Spider-Verse story together fluidly.  In #10 it does not feel as fluid.  The book could be described as a set up or foundational book that laying the groundwork for a variety of spin off stories.

The primary thrust of this book is getting the two big groups of Spider-Men together.  One group is being led by the Amazing Spider-Man (From Universe 616) and other by the Superior Spider-Man also of (616).  While the two leader inhabit the same body, the Superior Spider-Man is currently a man out of his time.  This means that in the present there are two of them.  The next issue is set up for a battle of who will lead the group.

Amazing #10 begins to set up a lot of major elements.  Spider-Teams end up shooting off on missions, here and there.  How does Spider-Woman end up where she is in Spider-Woman #1, find out here.  Likewise, you will learn how the Scarlet Spiders end up on their current mission?

The story is not super slick like #9 but is important for how much is set up here. The Amazing Spider Man team finds a group of Spider-Men in the year 2099 in the 616 universe.  They travel there to bring them all together.  Silk is supposed to remain behind but sneaks along.  This causes some big problems later. There they meet a grumpy a Superior Spider-Man who says he does not need help.  He believes they are all recruits.  He also notes that he had a cloaking device that masks the Spider scent that the Inheritors are using to track them.  However with so many Spider-Men in one place it will no longer work.  He also sees that Silk and Kaine the Scarlet Spider emit a very powerful Spider signal.  In no time flat the Daemos, Morlun's big brother has tracked down the team.  He boasts about killing them all, and is then suddenly dropped and killed by the Superior Spider-Man.  Superior Spider-Man has augmented himself with some 2099 technology and has even made it so the dead body of the Inheritor will not turn to dust.  This will allow them to study the Inheritors and find their weaknesses.  This victory is short lived however, as almost immediately a portal opens up and a new Daemos strides through with the two Twin Inheritors at his side. 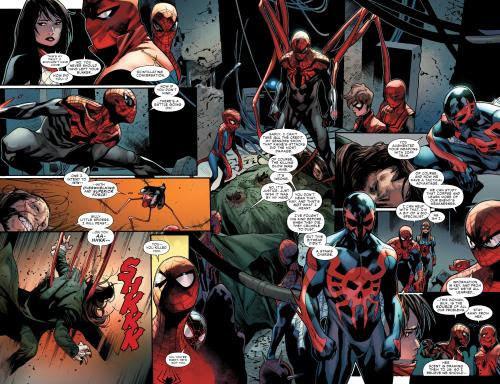 The Spider-Men then begin running every which way in small groups each with its own plan.  One group follows Silk in an attempt to keep her safe.  Another group the Scarlet Spiders sneaks into the Inheritors realm to determine how they are being cloned and stop it.
The other group heads back to the Cosmic Spider-Man dimension where it looks like Superior and Amazing Spider-Man are going to have a major disagreement.

One important plot point revealed is that a dying Ezekiel tells Amazing Spider-Man that the Bride and the Other are of primary importance.  It is not clear what these mystical titles mean to the end of the story.  The Other references Kaine and the story the Other.  Effectively, the Other is the one who chooses his Spider half over his human half.  This is why protecting Silk is of immense importance.

Characters - 4 - All the great Spider-Villains but most of the focus is on Superior Spider-Man who may turn into a foe.

Action - 3 - For the most part the Spider-Men are still running.

Extras - 3 - First death of Daemos?  First confirmed kill of an Inheritor by a Spider-Man other than the Amazing Spider-Man.

Overall - 3 - A good book, that feels overwhelmed by the amount of characters and plotlines running through it.