Who is Moses Magnum?

Moses Magnum is villain in the Marvel universe.  He begins as a fairly petty criminal, but gradually grows in power to become a powerful super-villain.

Moses Magnum News:
Marvel news, places, and characters
Who is Black Panther?
Who is Luke Cage?

His cutthroat personality and moral ambiguity make him a great arms dealer and he eventually becomes the president of Deterence Research Corporation (DRC) a major manufacturer of weapons.  As an arms dealer Magnum battles Spider-Man, the Punisher and Luke Cage.  Both the battles with Luke Cage and Punisher seem to end in his demise.  However, he not only survives but comes back with a super power.

Apparently, Apocalypse rescued Magnum from his battle with Cage and gave him a super power nicknamed the "Magnum Force."  The Magnum Force is effectively seismic energy that can cause earth wakes that come from Magnum's hands.  On top of the seismic waves, Magnum also has super strength.

He is stopped from blowing up a floating resort by the Avengers and Triathalon.

A plot to take over the African Nation of Canaan was foiled by Deathlok and the Black Panther.  Moses Magnum army was wanted by authorities but he devises a plan to elude them.  His force enters and overtakes the nation of Canaan and Moses Magnum takes the power away from its ruler, King Baru to give himself diplomatic immunity.  Magnum then builds a team of high powered mercenaries including Killjoy and Phreak by offering them a vision of creating an African nation that African Americans can call home.  Moses decides to try to get military technology out of Wakanda and dispatches first Phreak then a robot called Terrordome.  Both fail after running into Deathlok and the Black Panther.  Deathlok manages to track the Terrordome back to Canaan and the pair of heroes go there.  T'Challa expects to confront Canaan's king Baru.  There they learn of Magnum's conquest but are forced to retreat back to Wakanda.  Not wanting the world to know about his conquest Magnum dispatches the cyber enhanced mercenary Killjoy into Wakanda to assassinate the Black Panther.  After a brutal battle the heroes manage to defeat Killjoy but are badly injured in the process.  Deathlok manages to get back into Canaan and defeat Moses Magnum himself.  Without Magnum at the helm the rest of his forces surrender.

At one point his powers are vastly enhanced by Tyrannus and, "Those Who Wield Power" and he threatens to sink Japan beneath the ocean if they do not pay his ransom.  He is stopped in this plot by the X-Men. 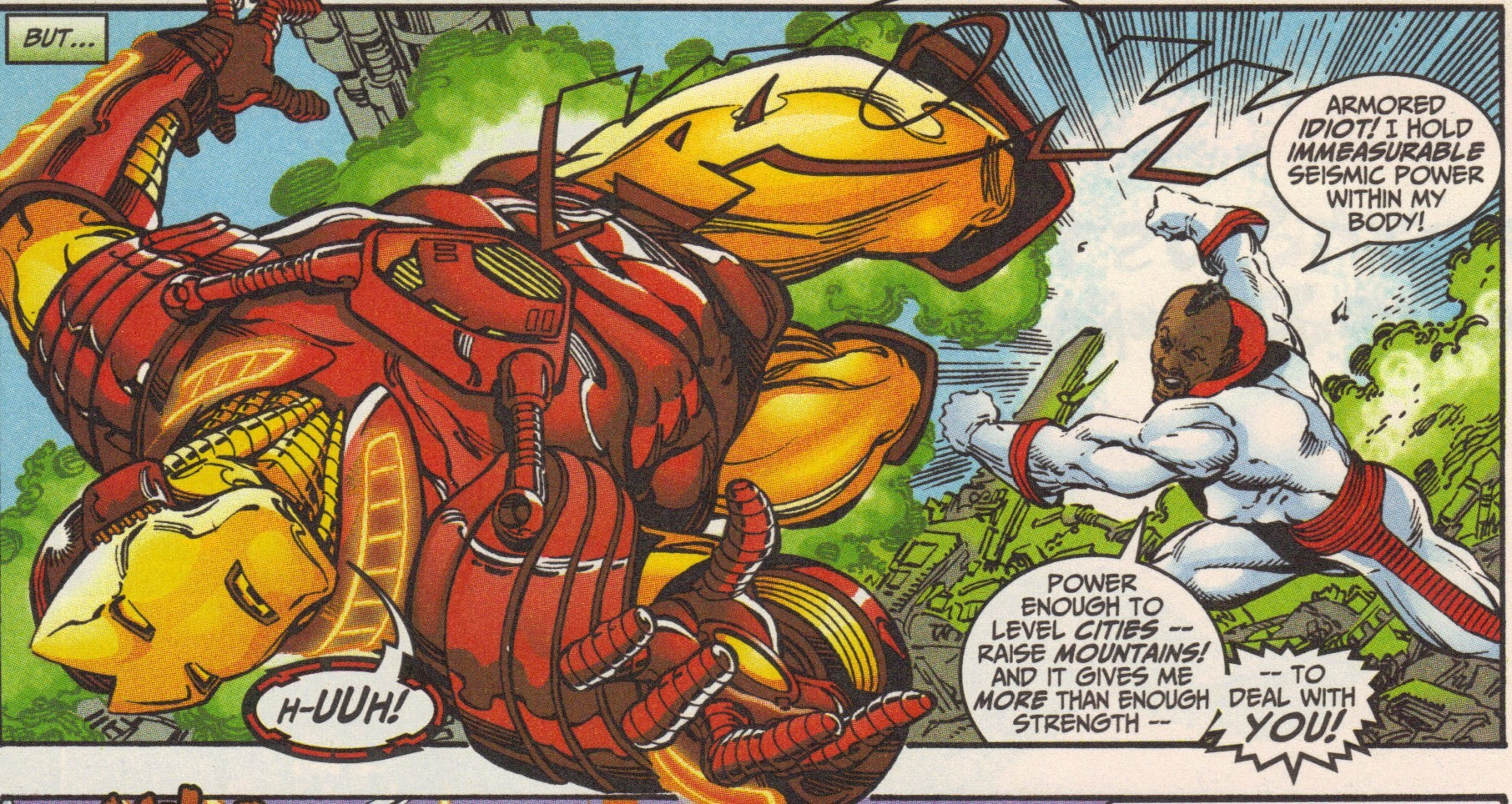 Control of seismic waves in his hands gives Magnum superhuman strength and durability.  He can also emit the waves as projectile like force that can cause great damage.

Over Magnum's criminal career he has battled a wide menagerie of heroes.  He has fought Spider-Man, the X-Men, Luke Cage, the Punisher, Black Panther, the Avengers, Triathlon, Daken, Ironman, Thor and Deathlok

Related:
Marvel news, places, and characters
Who is Black Panther?
Who is Luke Cage?
on July 31, 2020

Email ThisBlogThis!Share to TwitterShare to FacebookShare to Pinterest
Labels: #Marvel, One of the most feared enemies of Luke Cage and Spider-Man