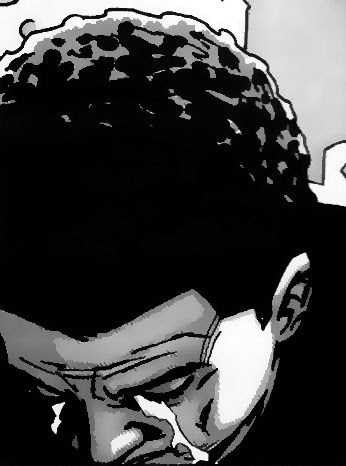 Meeting with Rick's Group
He meets Rick's group of survivors after they left the prison from the attack by the Governor, and after the incident with the twins.  Both events left Rick's group extremely on edge.  Gabriel sees this as an opportunity to make amends for his previous cowardly actions and invites the group back to his church.  While there the group begins to be attacked by the cannibalistic hunters.  Highly paranoid already Rick accuses Gabriel of working with the hunters.  Pressed by Rick, Gabriel admits the terrible story of his survival but says he is not part of the hunters.  Gabriel agrees to help lead the team through the woods they know to find the Hunters.

Confrontation with the Hunters:
When Rick's group finds and brutally kills the group of Hunters that had been stalking them, Gabriel is horrified.  He feels that Rick's group is just as morally twisted as the hunters.

No Way Out
During the No way out story line Stokes is presented with a similar situation as when the zombie outbreak began.  A zombie horde is closing upon the group and need into his church.  This time he lets the people in, showing some growth.

Currently the character is still alive after the events of the All Out War storyline.

Relationships:
Rick Grimes - Gabriel and Rick have a strained relationship.  Rick considers Gabriel a coward.  Gabriel considers Rick to be a brutal tyrant.  Gabriel once tried to get Rick's group kicked out of one of the communities.

Eugene -
The two have shared a few amicable moments discussing the existence of God.

TV Series:
Gabriel Stokes is set to appear on Season 5 of Walking Dead and will be played by Seth Gilliam.