What is Vibranium / Carbine? 
Origins:
Vibranium comes from a meteorite that landed in the African nation of Wakanda.  The Wakanda king T'Chaka at the time sees the potential of the metal and conceals its existence from the world. He sells smalls amounts of the metal and spends the money mostly on education.
Eventually, the deposit of metal is found by the mercenary villain Ulysses Klaw who kills T'Chaka.

T'Challa the son of T'Chaka takes over leadership of the country.  He is open and transparent with the world about the Vibranium deposit.  He sells off small amounts of the metal to fund a massive infrastructure upgrade of the country making Wakanda into a technological powerhouse.

Numerous countries, aliens and super villains attack Wakanda to try to gain control of its Vibranium but are repelled by the hero Black Panther - T'Challa, the Wakandan military and allies like the Avengers and X-Men.

Notable uses of the metal in the Marvel Universe Include:

Captain America's SHIELD
A vibranium-iron alloy was created somewhat accidentally by Dr. Myron MacLain.  Dr.  Maclain was trying to merge the metals together to form an alloy but could not find how.  All of his experiments to merge the two metals failed miserably.  One night while he is sleeping the metals seem to merge on their own.  The process has never been duplicated making the metal in Captain America's SHIELD entirely unique.

Vibranium is also used in various other devices like his Kimono card that gives him communication access to Satellites as well as his boots that allow him to run on walls.

Klaw's Weapon
Ulyssess Klaw creates a weapon to control sound using Vibranium.  This device eventually leads to him being constructed entirely of solid sound.  Ironically, When one of the few items that can hurt Klaw in his sound form is Vibranium.  Vibranium disrupts his sound construct, in a sense it dissolves him.

Ultron
Ultron upgrades himself to be made of tougher metals.  In the comics he uses Adamantium.  He is actually the first character to use Adamantium in Marvel comic books.  However, it is speculated that in the Marvel Cinematic Universe he will use Vibranium instead.

Side effects:
Vibranium may have mutagenic qualities and is likely the origin of the powers of heart shaped herb eaten by the Black Panther as well as the flesh of White Apes that give Man Ape his powers.

It is also thought that Vibranium can enhance mystical energies.  For this reason it also sought after by magical villains like Doctor Doom.

Note: The first metal called Vibranium in the comics (Daredevil #13 1966)  was a metal that could cut through any other metal.  This is now known as Anti Metal and is found in Antarctica.

In the Agents of SHIELD episode "Heavy is the Head"  Raina (Flowers) hands some of the metal to Creel (The Absorbing Man) in a plot to steal the Obelisk from him.
She describes Carbine as 3 times harder than diamond, coming from star dust and can store energy. 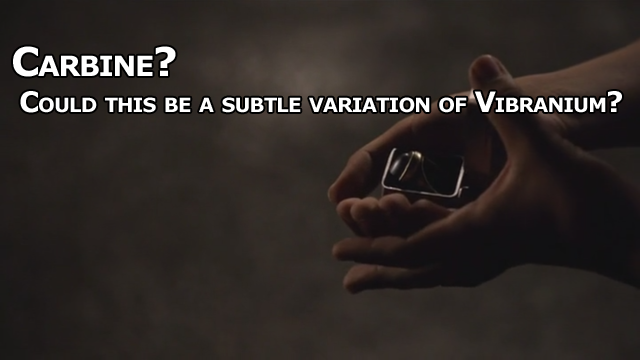 Carbine / Vibranium will be featured in Avengers Age of Ultron where Ultron will use the metal to create a higher and stronger upgrade of himself.

Related Posts
Who is Black Panther?
Who is Man Ape?
Who is Klaw?
Who is Ultron?
Wakanda
The hidden gems of Season 2 of Agents of SHIELD