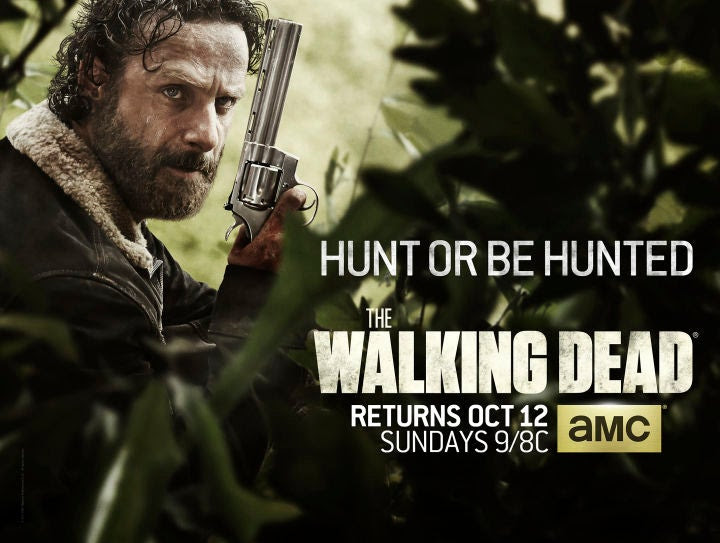 My one sentence Review:  Thilling, awesome, scary, terrifying, and without disappointment.

Walking Dead Season 5 Premiere may have been the most action packed episode of the Walking Dead series so far.

Related:
All things Walking Dead!
Who is Father Gabriel Stokes?
Who kidnapped Beth?
How will Rick and Company escape Terminus

It was also full of surprises.

One thing I found interesting is that the season preview led the viewer down a road of what would happen but the actual reality of what happened was entirely different.  This fact is even more amusing when people complained that the trailer revealed too much about the season.  Now looking back the Trailer was an elaborate trick of editing.  The brains behind the series are very astute and know that millions of geeks like me are watching everything released and are trying to puzzle it together.  They want the puzzle to be as difficult to assemble as possible it seems.  Which makes sense because I for one enjoy the challenge and I assume I am not alone.

That said I think I see where at least in part where the season is going.

A brief review I will try to make as spoiler free as possible:

Review:
Viewers quickly learn that Terminus is the big, bad evil that all Walking Dead fans feared it was.  The creators have really taken a small gap in the comics and enlarged it and created this metaphor for Institutionalized Evil.  Terminus is a lot like the Nazis efficient, intelligent but completely uncaring and brutal.  Scott Gimple revealed that in the script he wrote in the margins that the attitude of the workers there was "Making Donuts" or another day at the office.   As the premiere reveals Terminus in all of its gory glory it also provides insight through various flashbacks on how this terrible group came to be.  Their ideology can be summed rather succinctly.

"You're either the Butcher or the Cattle"

Despite the efficient and seeming brutal perfection of the Termites a flaw is found and it does not take long for Rick and Co to go on the offensive.  I won't say who finds the flaw, these scenes were just way too much fun, thrilling and unexpected.

We are given our answer to the question:
How will Rick and Company escape Terminus

It was in my opinion a great answer.

In the end it feel like our characters are free of the brutal institution of Terminus, but .....are they?

We know from the preview of next week that we will be introduced to Father Gabriel Stokes who appeared in the comics while the group was battling a group of cannibalistic hunters.  After last night I think its clear that the remaining Termites are going to become the hunters in the comics and much of what was in the comic will play out.  The hunters will likely attack and kill a few of the group, and Rick and CO will retaliate in brutal fashion.

We will also be given an answer to what happened to Beth.  My theory of her being with Father Gabriel seems flat out wrong.  She is alive, in a place she does not like, with a very mean lady.

Somewhere in the season, the group will likely end up at one of the real sanctuaries.

The big question will be who will survive to that point in time?


Related:
All things Walking Dead!
Who is Father Gabriel Stokes?
Who kidnapped Beth?
How will Rick and Company escape Terminus
on October 13, 2014