Marvel had a couple of panels at New York Comic Con on their upcoming series Daredevil.  They also mentioned that Luke Cage and Jessica Jones have not been cast yet.  They did not mention Iron Fist which means he is likely cast.  They also have apparently had their eyes on Charlie Cox as Matt Murdoch for a longtime (Prior to getting the Daredevil rights back).  The only name I have heard on Iron Fist is Zach Efron but that is still only a rumor.

First they revealed concept art for the series.  That has Daredevil with bloody fists.  His costume also appears to be the early, mismatch of items he used prior to developing his actual costume.  This means his costume may progress over the series.

This black suit looks similar to the ninja like suit Daredevil wore in the Frank Miller series.  It is one of his first attempts at making a costume. 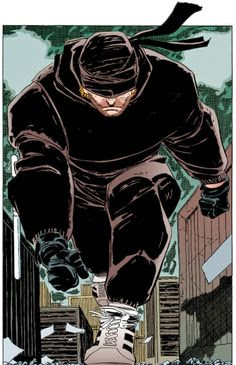 Clip preview of the series

The audiences were also shown some clips.  Below is a highly detailed summary of those clips for those interested.  Warning Spoilers Ahead.


The first clip we saw was one of action. The scene takes place inside Karen Page's (True Blood's Deborah Ann Woll) apartment. It is dark and green. The whole series is about two green tone down from a David Fincher movie, but it's still fairly green. And dark. It's almost hard to see all the action (which could be just the nature of screening dark footage in a giant hall) but it's dark. Karen gets home and sees the window open, she's nervous, there's a spot of blood on the floor (or black good, again so dark). Even more nervous Karen climbs her furniture, rooting out what appears to be a USB port squirreled away in an air vent. She sighs, but she's not alone. I dark haired man appears from the shadows and just chucks her against the wall. This causes her to scream and drop the USB stick or port or whatever. The intruder grab it, and then takes out a knife (cue the knife noise). But before he can slice up Karen there's another intruder. No it's Daredevil! But it's early Daredevil, pre-suit Daredevil.

The fight, it's intense, it's quick, it's dirty but mostly it's very dark. At some point Daredevil falls out the window, clangs on some scaffolding and lands facedown in the street. The knife CLANGS to his side, the rain thunders on the pavement. All the sounds are heightened. And then BOOM you're back in time. Daredevil is having a flashback. Everything has a yellow hue. Little Matty Murdock is asleep at a kitchen table and his Dad wakes him. He tells him to study so he won't end up "like him." He holds a bag of frozen vegetables to his face. He's been beaten, bad. His boy feels his bruises. And his father says, "Come on Matty get to work." Those words spring modern day Daredevil to life. He pushes himself up black rain falls off his head, but red back light blood pours from his mouth. Then Daredevil beats the ever loving shit out of the intruder. It's excellent.


The second scene showcased Rosario Dawson and Charlie Cox's banter. Murdock wakes up in Claire's apartment on her couch. It's quick and fast but it's good. Fairly believable for the situation that is being showcased. When Murdock freaks out (being blind and on a stranger's couch) she fires right back at him. Somehow Claire fished Murdock out of the trash and now wants to know, "how a blind man in a mask ends up beaten half to death in my dumpster?" Murdock has other concerns, "you've seen my face." He states and refuses to tell her his name. Claire is nonplussed, "I'm not looking for some guy to die on my couch on the night off." They do the whole "the less you know about me the better" exchange and Claire settles on calling him Mike because, "a guy I used to date turns out he was very good at keeping secrets too. It's quick, it's good, it's still in that green filter but that pace is great.

A lighter clip this short moment showed the softer side. Murdock in his day role as lawyer for Nelson and Murdock. And Cox goes full dorky Murdock in it. Sure he's charming but he's not too charming. Together Murdock, Nelson meet (and are fed) but Karen Page. It's her thank you for getting her out of jail. She's feeding them and basically asking how she can help. They all decide by joining the tiny firm. It's cute. Very cute.