Mr. Fish is a villain of Marvel hero Luke Cage.   He has super strength and a bizarre appearance of a fish humanoid.  His interesting appearance have made him one of Luke Cage's most famous and popular villains.

Like Chemistro and other Cage villains there are multiple Mr Fish with the 2nd Mr Fish being the brother.  While the origin of the first Mr Fish is explained it has yet to be revealed how the brother acquired the same power and mutation of the original.

The 2nd Man to be Mr. Fish appears in Luke Cage Season 2.  He accosts Misty Knight in a bar where he claims his brother had an altercation with Misty.  Misty Knight and Colleen then team up to battle Bill and his thugs.  It is unclear if Mortimer or Bill could reappear in the season as Mr. Fish.

Quote: "No one laughs at Mr Fish.

Media:
Bill Norris makes an appearance in this Clip from Luke Cage Season 2.  He has not yet transformed into the mutate form of Mr Fish.  However, the clip does seem to hint that his brother could be.  This is also the first time Misty and Colleen fight together.  Making this clip also represent the beginning of the Daughters of the Dragon. 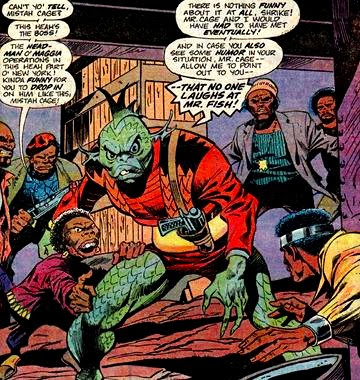 Mortimer George Norris
Mortimer George Norris is exposed to radioactive material and gets sick.  Stumbling around ill he falls off the East River Bridge and in the water comes into contact with fish.  The combination of fish in the river and the radioactive material cause Mortimer to mutate.  When emerges from the river he has undergone a mutation that gives him the appearance of a fish and super strength.

Mortimer takes on the moniker Mr. Fish and begins working for the crime family the Maggia.  In no time he is running his own cell of the Maggia.  Luke Cage tracks him down and the two fight.  Mr Fish is able to overwhelm and knock out Luke Cage.  The followers of Mr Fish urge him to finish off Luke Cage but Mr Fish wants to gloat.  When Cage awakens Mr Fish wastes time explaining his master plan to Cage.  This buys Luke Cage the time to recoup he then fights Mr Fish and this time beats him.

Mortimer appears in the All New All Different Marvel universe as a gangster working for Tombstone.  Mortimer is specifically in charge of Harlem.  He appears first to tell Tombstone that he has intel that the Black Cat is going to move in on their operations in Harlem.  Later is confronted by Alex Wilder originally from the Runaways.  After the events of the Runaways stopping the planned sacrifice of the Pride, Alex was blasted into obliviion by the Gibborim.  He then ends up in a special kind of hell along with other fallen Gibborim.  He manages to escape and leaves with special dark magic powers.  He seeks to create a criminal empire of the Pride in Harlem and attacks Tombstone and Mister Fish.  He defeats Tombstone with enhanced powers and uses magic to send Mister Fish into Hell.  Later Tombstone manages to rescue Mister Fish from Hell.  This version of Mister Fish has not been seen since.


Bill Norris
This Mr Fish is then replaced by his brother, Bill Norris.  Some how Bill Norris ends up with the same powers as his brother.  He also keeps the tagline  "Nobody Laughs at Mr. Fish."  Bill first shows up visiting an exotic nightclub along with the Walrus.

During the Shadowland story, Bill Norris joins the Flashmob group of Power Man villains with aim of bring him down. 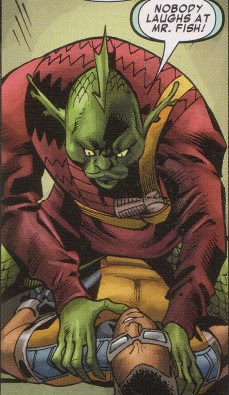 Email ThisBlogThis!Share to TwitterShare to FacebookShare to Pinterest
Labels: #LukeCage, #LukeCageSeason2, #MrFish, Mr Fish may make an appearance in Luke Cage season 2 based off a teaser video that teased out the villains name