Ant-Man is a Marvel superhero who has the ability to shrink his size to the size of an ant. He also has the power to communicate with and control insects.  There are three men who have worn the Ant-Man suit, Henry Pym, Scott Lang, and Eric O'Grady.

Hank Pym is a brilliant biochemist considered by some to one of the greatest minds on Earth (Along with Tony Stark, Reed Richards, and Blackpanther).  He invents a special particle that has amazing properties and names them "Pym" Particles.
Using Pym Particles Hank learns he can alter the size of any object, making it larger or smaller.  He also invents a helmet that allows for communication with ants.

Hank decides to use his inventions to become a hero and while wearing the special helmet he shrinks himself in size, and calls himself Ant-Man.  While shrunk to the lower size Hank learns that he maintains his normal level of strength, thus Ant-Man is able to lay a hay maker on a criminal while shrunk to the size of an ant.

Hank shows his girl friend Janet Van Dyne the pym particles and she joins him on his adventures as the Wasp. Together the two of them become founding members of the Avengers. 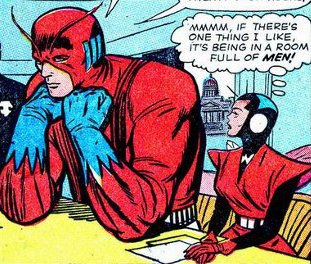 All does not go well for Hank.  He has some dark dramatic periods of feeling inadequate from being known as the small hero.  He then creates a new personas called Giant and Goliath where he grows instead of shrinking.  While, this seems to help his ego the character continues down a dark path.

Hank is tormented by guilt for creating the powerful Avengers nemesis the evil robot Ultron.

It should be noted that not all parts of their relationship were bad.  They had great heroic moments, they founded the Avengers and they explored their powers in whole new ways.

These dark periods of the hero are likely why Marvel will build the franchise around Scott Lang as opposed to Hank.  The first married super hero couple had a very rocky road which while interesting is not where Marvel wants to go with the film franchise.

Scott Lang is a petty thief who steals the antman suit to save his daughter Cassie.  Hank Pym eventually finds him and becomes his mentor.  He encourages Scott to keep the suit and use it to be come a full fledged hero.

Scott at one point dates Jessica Drew prior to her relationship with Luke Cage.

He is killed by the Scarlet Witch in the storyline Avengers Disassembled but has since returned to life.

Eric is a SHIELD agent with no morals.   He finds the antman suit and steals it to further his own ends.  O'Grady uses the suit to have fun, pick up women, spy, steal, annoy people and generally have a good ol' time.
Eventually, he ends up in a situation where he is forced to act like a hero.  He does but only very reluctantly.
In the end the antman known as the Irredeemable Antman does in fact redeem himself when he sacrifices himself to save a boy from the supervillain known as Father.


Ant-Man will be one of the Marvel's first movies in Phase 3 the time period after Avengers Age of Ultron and leading toward Avengers 3.

The main Ant-Man hero will be the character Scott Lang and be played by comedian/actor Paul Rudd.
Michael Douglas will play Henry Pym who will be an older mentor figure to Scott.  Evangeline Lilly will play a female character expected to become the Wasp.  The villain of the movie is a character named Yellow Jacket and will be played by Corey Stoll.

The first Antman Easter Egg can be seen in the show below.   Lang is walking past a poster for a soda drink.  This is the same soda brand that was shown in the Incredible Hulk movie.
Related:
Ant-Man movie- News, Speculation and character bios

Why Ant-Man could be AWESOME and why it could SUCK!

Who is the Wasp AKA Janet van Dyne?