Will Vin Diesel be Blackbolt?

We may soon see Vin Diesel as Blackbolt the king of the Inhumans!

Related:
Who is Blackbolt? Why is he so powerful?
Who are the Inhumans?
Is Skye an Inhuman?

Inhuman News Courtesy of Collider:
Marvel has said they are going forward with their Inhumans movie.  They are currently looking for a director.  According to the site Collider, "Marvel plans to handle The Inhumans in the same way they handled Guardians of the Galaxy"  They will take the script by Joe Robert Cole and meeting with various film makers then hash out the movie.  The movie is said to take over one of Marvel's release slots.

Vin Diesel has met for another Marvel part that was farther out. The excitement caused by him meeting with Marvel startled both Vin and Marvel.  Marvel then asked Vin Diesel to do the 2nd part of Groot that would occur earlier that the first one pitched.
Vin Diesel proceeds to knock Groot out of the park do an amazing job adding distinction to a single line "I am Groot."

No one knows which character was discussed by Marvel and Vin Diesel but I strongly feel it could have been Blackbolt.  I think he just looks like the part. It would also match the timeline that he seemed to be discussing with Marvel.  It seemed that project would lead up to Avengers 3 in Marvel's phase 3.  Certainly, the Inhumans movie will fit into that slot of films.

Update:  10-12-2015
Vin Diesel in an interview with i09 says that since his voice is used for Groot the other Marvel  character he plays would have his presence but not his voice.  This seems to confirm that he would be playing Blackbolt.
Exact Quote:


“We’ve heard a lot of talk about Marvel wanting to have me play a character that doesn’t have my voice. So my voice is used for Groot and my presence is used for the other character.”

Blackbolt's voice is so destructive that he can not speak without causing massive destruction.  He is also a huge character that would fit Vin Diesel's profile. 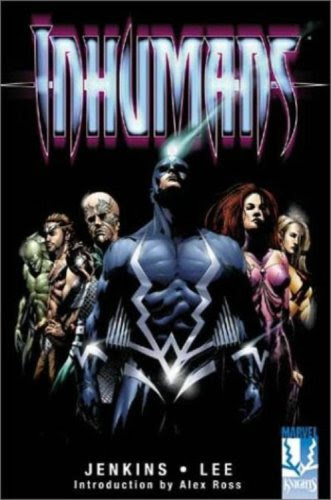 Who are the Inhumans?
My guess is it will be a cross between Game of Thrones, and the Guardians of the Galaxy.


Agents of SHIELD connections?
Has been heavily focused and building up the Inhuman mythos on its first 3 seasons.  They have however stayed away from the Inhuman Royal Family that will likely be the focus of the film.
Is Skye an Inhuman?