Why a Beta Ray Bill Movie may be coming 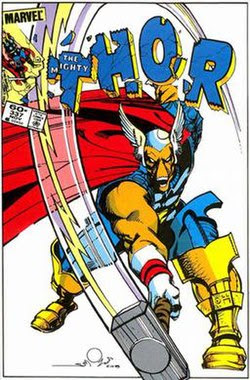 After seeing what I think looked like Beta Ray Bill in Guardians of the Galaxy I have begun looking for other signs of Beta Ray Bill.  I found some other signs that Marvel may have plans for our favorite Korbinite.
Yes true believers there are a few reasons to believe that Beta Ray Bill could be coming to movie screens soon.

1) There is a figure in a cape that strongly resembles Beta Ray Bill in the Collector's museum.  He does not show up after the museum is destroyed so we can presume that he is free.
Is Beta Ray Bill in Guardians of the Galaxy?

3) Guardians of the Galaxy showed many alien people that looked like Korbinites.  The fact that so many were on Xandar could mean that they have already left the Burning Galaxy.
Who are the Korbinites?
4) Surtur is rumored to be the villain of Thor 3.   Surtur is also key in Beta Ray Bills origin.  It is Surtur that creates the cataclysm that destroyed the planet Korbin and sent the Korbinites fleeing into space.  In the Beta Ray Bill story Bill and Thor join forces to battle Surtur.

5)  Age of Ultron - The cool thing about Beta Ray Bill is his ability to pick up Thor's hammer.  This happens after numerous heroes have tried to pick it up.  In Age of Ultron the first scene has all the heroes trying to pick up Thor's hammer.  Drawing attention to the enchantment on the hammer Mjolnir could be setting the stage Bill in a later movie.
Bill was created to really highlight the qualities that are necessary to pick up the hammer.  This is best explained by Bill's creator Walt Simonson.


One of the cool things about Thor was the enchantment around Mjolnir and the original inscription on it. So I thought, well that means someone else can pick up this hammer and get this power, if they're worthy! So since then, some other big characters, people's favorites, have picked up the hammer, Captain America, Superman, whoever. But at this point, no one had ever picked up the hammer. I liked the idea of Cap walking to the bathroom and seeing it, and grabbing and just tugging, not being able to. So this had to be someone new. This is the most powerful weapon of the Norse gods. This hammer is a killing weapon. It's used to kill Frost Giants and others. So, Superman couldn't pick it up, cause he's never going to kill anyone, and the hammer knows that. Captain America, he's too patriotic. He's too much a symbol of America to be chosen by this Norse artifact. So he couldn't get it. So I created Bill because he's noble, and he's designed to kill. He's got a great purpose as a warrior, and also the noble ability. That makes him "worthy" whatever that may be.
...So I wanted for Bill, I wanted him to have a "monstrous" look as a visual, so that everyone would think he's a bad guy, and I got letters after the first issue that said "What on earth? Why is this monster picking up the hammer, what's wrong with you?" and I said "I got it!" So I basically started with a skull, and then I made him a bit like a horse, with the gap behind the teeth. But horses are beautiful creatures. So what I was aiming for is a sense of death, a sense of monster, underlined by beauty. His costume was the same so that the minute you see that image, when he strikes the stick and becomes "Beta Ray Thor" or whatever, you know: OK, that guy has the powers of Thor. So that's why Bill had the monstrous face, that's why that stuff was done the way it was done.[3]


When will Beta Ray Bill show up?

When will Bill show up?  My best guess is that he will show up in Thor 3.  It would be an epic and cosmic story that could also help tie into Avengers 3 and Guardians.

What do you think?  Will Beta Ray Bill be showing up?