Who is Steel Serpent?

Who is Steel Serpent?

He is set to appear in the the Netflix series Iron Fist.   The Steel Serpent symbol already appeared on drugs being shipped in NYC in Daredevil season 1.  The character of Madame Gao on Daredevil seems to be the MCU version of the character Mother Crane whom shares close ties with Steel Serpent. 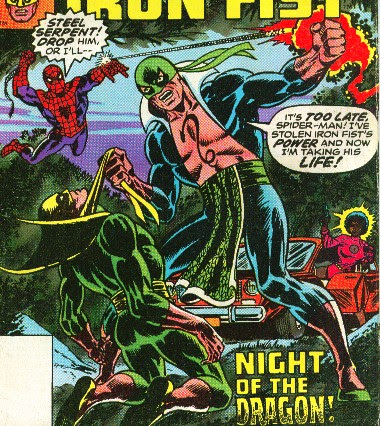 Davos AKA Steel Serpent is a native of K'un-L'un and the son of K'un-L'un trainer and champion the Thunderer.  Davos feels that it is his destiny to become a dragon lord of K'un-L'un and gain the power of the Iron Fist.  However, he is thwarted by the adopted son of the ruler of K'un-L'un Wendel Rand. Wendel manages to beat Davos and become the number one heir to be ruler.  Davos accuses the ruler Wi-Ti of favoritism.

Wendel Rand does not battle the dragon instead he leaves to go to Earth. Wendel's son Danny however goes to K'un-L'un and does battle Shau-Lao and gains the power of the Iron Fist.  When Danny Rand (Iron Fist) comes to Earth he is hunted by Steel Serpent who wants to steal his power and gain the Iron Fist power that he feels is rightly his.

In one story the Steel Serpent works for a leader of the heavenly city of Kun-Zi, known as Mother Crane.  Mother Crane provides him with women martial artists called the Daughter Cranes.  The Daughter Cranes sacrificed their lives to give him extra powers.  Davos was nearly able to kill the Iron Fist Danny Rand and the previous Iron Fist Orson Randall but Randall sacrificed himself to give Danny the powers to defeat Davos.

Powers and Skills:
Steel Serpent is a very strong martial artist and is an equal to Iron Fist.  He is able to defeat Iron Fist a few times after long brutal battles.

He also has the power to absorb Iron Fist's powers through a Serpent tattoo on his chest.

The mystic leader Mother Crane also gives Davos the Daughter Cranes who provide him with Chi by sacrficing their lives.