What will Guardians of the Galaxy Sequel focus on? SPOILERS

I want to write this without giving away too much about the Guardians of the Galaxy movie.  Still some spoilers are possible.

The Guardians of the Galaxy first movie started a few threads that I think the sequel will focus on and that opens up some interesting stories and characters. Adam Warlock's cocoon was in the possession of the Collector.  It was shown slightly open in the end of the movie.  Meaning that Warlock is out and about.  This was not a random Easter Egg as the Warlock Cocoon was also seen at the end credit scene of Thor 2.  I think Warlock will in some way join the Guardians on their adventure and be a major character throughout the next movie.  It would not surprise me if Warlock shows up in an end credit scene of the Avengers.

J'son of Spartax and the Spartoix Empire
Who Starlords Father? Why is he so important?
A tremendous amount was hinted at but not explained about Starlord's father.  Comic fans know that J'son of Spartax the Emperor of the Spartoix Empire is his father.  The two come into conflict quite a bit in the comics and there are a variety of ways they could take the story.  Starlord could try to help out his knew found Dad against a threat or he could oppose him. Another interesting angle would be if J'son offered the seat of the Spartiox Empire to Starlord if he is willing to betray the Guardians.


The Universal Church of Truth
The evil dictatorial Church is in an intolerant Empire that worships Warlock's counter personality the Magus.   The Church is a major foe of the Guardians of the Galaxy and also a big component of the story of Adam Warlock.   Magus could be the central villain of the story.

Kree and the Inhumans
Who are Skye's parents Inhumans?
Another potential direction would be to focus on the Kree empire.  Especially, they met Ronan the Accuser.  Perhaps this could flesh out why the Kree want Xandar destroyed.
They could also bring out the Inhumans and their connection to the Kree.  While this may seem outlandish Agents of SHIELD is hinting strongly at both Kree and Inhumans right now.


Other characters that would be fun to see show up:

Cosmo
I would not mind seeing more of him and he potentially take over Knowhere station after the event there in Guardians of the Galaxy.

Watch out for Cosmo the Space Dog! 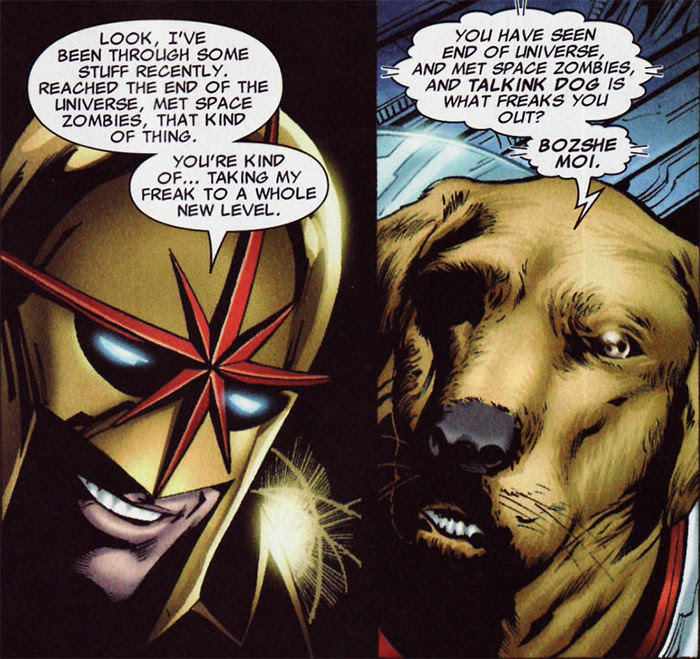 Moondragon
Much of Drax's origin seems to have changed does Moondragon his daughter still exist in the cinematic universe?
Watch out for Moondragon!

Rich Rider
Nova Prime at one point calls Rhomman Dey a Dennarian the rank of a lower-mid level Nova Corps members.  This sentence carves out room for a higher level Centurian Nova member that has super powers like Rich Rider.  I think that sentence was added deliberately for that reason.  Could Rider show up...Short answer Yes.

Watch out for Rich Rider - Nova

Mantis
Mantis is one of the telepaths that joins the Guardians of the Galaxy.  She has links to the Kree aliens as well which mean she could make an entrance.

Watch out for Mantis!

Carol Danvers
It has been rumored that Marvel is planning a Ms Marvel movie.  If this is the case they could introduce Carol in an after credit scene or mention her in passing.

Watch out for Carol Danver aka Ms Marvel!!!!

Characters from the Planet Hulk Story
James Gunn shot down the rumor of Guardians of the Galaxy sequel being made of elements of the planet Hulk story.  That said there are Sakaarans in the first movie.  There are also what appear to be red skinned Imperial Sakaarans running around Xandar.  There is also potentially a red skinned imperial in a cage in the Collector's warehouse.  Could this be the Red King?  Who knows how many Easter Eggs are in his warehouse.

Characters from Planet Hulk!
A closer inspection of the Collector's Museum