What villians do you want to see in the Defenders?

Defenders will have a show focusing on the heroes Daredevil, Luke Cage, Jessica Jones and Iron Fist the four heroes have faced off against many villains over the years.  This page is to speculate on potential appearances as well as record appearances as they occur.  It also shows where Easter Eggs to various villains occur.

Night Shade and Bushmaster are set to appear in Luke Cage Season 2.  Nightshade will make first appearance in the film Black Panther.

The below list covers the potential villains that could appear or be referenced in the different Defenders series.  Beneath each villain I have listed where they appear or will are rumored to appear.  I have also highlighted villain Easter Eggs and where they appear.

The Kingpin
-Will be featured, potentially as the big bad that unites the heroes. Marvel made a point of saying that his rights were purchased along with Daredevil.

- Powerful foe who can absorb traits of what he touches.

Bullseye
- Daredevil's Joker - He has already appeared in the first Daredevil movie and will likely appear in the Daredevil series.  When you start talking Daredevil it is hard to not start thinking about Bullseye.


The Wrecking Crew
- Super powered and some of the most well known foes of Luke Cage.  Includes Wrecker, Pile Driver, Thunderball, and Bulldozer

Chemistro
- There are various Chemistro's but he is a mainstay street villain.

Cheshire
- Can disappear like a cat, expect him to appear on the small screen

Cockroach Hamilton
- An assassin in Harlem who uses a customized shotgun.

Coldfire
- Luke Cage's brother given powers to battle him. 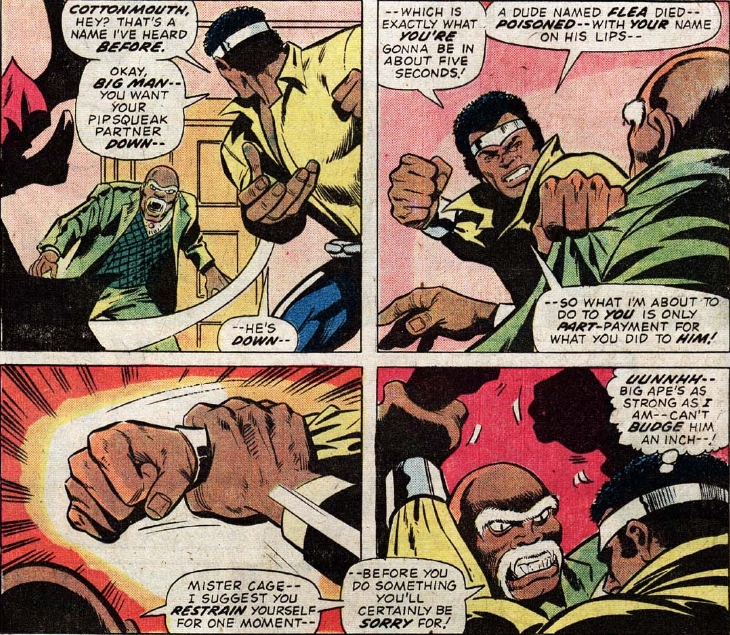 Gideon Mace
- He just seems like a strong fit for a TV show.

Gladiator aka Melvin Potter
- Villain faced by Daredevil early on in his career.

Hammerhead
- More known as Spider-Man villain but Marvel has the rights to him.

Klaw
-Generally considered a Black Panther villain but he has fought many other heroes overtime.

Easter Egg: Glen Talbot mentions operation "Panther Klaw" in Agents of SHIELD.  Also metal that could be Vibranium was depicted.
Appeared:  Avengers Age of Ultron- His arm was ripped off while dealing with Ultron.
Appeared:  Black Panther


Loneshark
Villain who has faced off against the Heroes for Hire

Mister Fish
- A Luke Cage villain known for his strength

Mother Crane
- Iron Fist villain who faces off against him the 7 Cities stories.  She is a leader of a rival city of Kun Lun.

Moses Magnum
- Luke Cage and Moses do not get along.  Another villain that started out as Spider-Man villain but I most associate with Luke Cage.

- Known for being a Spider-Man villain but faced off against Daredevil in an epic story that ended with his demise.

Nightshade
- Mastermind who battled Captain America and Heroes for Hire


The Punisher
-Frank Castle is an anti-hero whose extreme form of justice or punishment often puts him at odds with other heroes.

Purpleman
- Could be a controversial addition to the series but certainly has strong connections to Luke Cage and Jessica Jones.  He uses his mind control to rape and brutalize people.  He is easily one of the most evil characters in the Marvel Universe. Special effects wise you could just give an actor a purple tuxedo.

Shades
- Former member of the rivals gang that Luke Cage was a part of.  Gains equipment that allows him to shoot optic blasts like Cyclops from the X-Men.

Serpent Society Members
- Have a long history of battling all of the heroes above.


Stilt-Man
- A villain with an armored suit and stilts that has faced off against Daredevil many times.

- Vendetta against Danny Rand/Iron Fist and is his primary nemesis.

Titantia
- Strongest woman in the Marvel Universe next to SheHulk.

Tombstone
- Typically considered a Spider-Man villain but like Hammerhead I believe Marvel has the rights to the stone skinned gangster.

Willis Stryker
- Former friend of Luke Cage, frames him for a crime which lands him in Prison.  Expert with knives.