Overview:
Krylorians have a limited comic history and are best known for the character Bereet and for being the race of the fusia skinned characters in the 2014 movie Guardians of the Galaxy.

Location:
Krylorians are space faring and are spread all over.
However their home world is on the planet Krylor


Physical Identifiers.
Krylorians are humanoid with reddish skin, hollow bones, and feathers for eye brows.  They are descended from an avian ancestor similar to the Shi'ar.  While the Shi'ar are physically far stronger than humans, Krylorians are about as strong as humans.
In the Cinema universe they do not appear to have feathers for eye brows and they have small scars/indents on their face.

Government
The government on Krylor is a democratic republic.  They are mostly peaceful.

Technology:
Krylorians have advanced technology that includes manipulation of matter as well as interstellar travel.
They use this technology to create hyper real forms of art that appear to be real.  A Techno Artist merges cinema, music with real life.  It is a bit like reality television shows like Survivor but where the cast does not realize they are in a show.  This creates confusion in many humans and Earth Super Heroes who can not tell the difference between what is meant to be art and real when dealing with Krylorians.  This was particularly true of the Hulk who was something of a celebrity on Krylor.  This is why the famous Krylorian Techno Artist Bereet comes to Earth to do a documentary on the Hulk.


Cinema:
In the movie the Guardians of the Galaxy there are a few prominent Krylorians depicted.   They are the fusia skinned people milling around. Many Krylorians seem to live on the planet Xandar.  No major male Krylorians are shown however there are three to four Krylorian female characters. 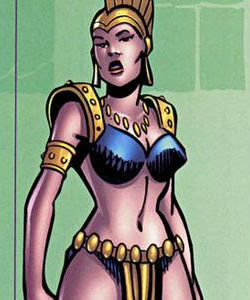 1) Bereet - Bereet is aboard Peter Quill's ship for a tryst.  She wakes up when Star Lord returns to the ship from retrieving the orb on Morag.  In the comics Bereet is a character who becomes fascinated with the Earth hero the Hulk.  She is a techno artist which is basically a movie director and rockstar rolled into one.  As a Techno Artist she creates life like movies for other Krylorians to enjoy.

2) Carina - The Collector's assistant appears to be a Krylorian.  In the comics she is his daughter but in the movie she seems to be his slave.  She dies trying to use the infinity power gem to escape his clutches.

3) The Collector's former assistant is shown in a cage.  The collector uses her presence as a warning to Carina not to act out.

4)  Rhoman Dey of Nova Corps is shown to have a Krylorian wife and a Xandarian/Krylorian  daughter.