This is the first post in what I hope will be a series that focuses on great Cosplayers from around the world.  I like art in all of its myriad of forms and the fastest growing art movement is Cosplay.  It may not be represented yet in the stuffy art museums, it may not be psychoanalyzed in art books.  Cosplay is still this weird thing that geeks like and people outside of the geekworld still look upon with a certain degree of derision.  I do not venture that this blog is going to change how Cosplay is viewed in society but I do hope to at least shine a little light on some of the phenomenal things going and one of those amazing things is certainly Karin Olava.

Karin Olava is a Cosplayer out of Norway.  Most of the Cons she travels to are in Europe and thus I know next to zilch about them.  What I can say is that when Karin shows up, she really shows up.  Her costumes are typically from the video game like Halo, Mass Effect, Dragon Age, and bungie's new game Destiny.

Last year Karin was interviewed by Bungie for her Cosplay of a hunter from the game Destiny.  It was a good interview and it show cased her love of video games and her amazing artistic ability.
Bunjie Community Focus on Karin Olava 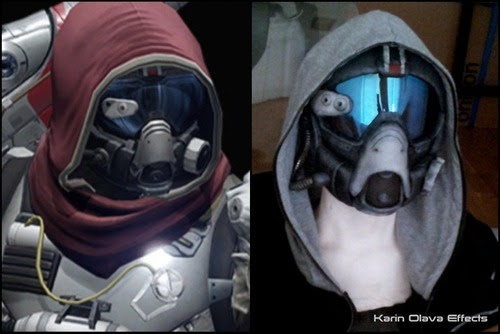 You can follow her work as she constructs a COSPLAY.  I think some people think that these costumes go together quickly.  When you look at the pictures on her tumblr you can see that it takes an immense amount of artistic skill and work.  Her tumblr highlights initial sketches and the design of the costume and accessories.  It gives you an idea of how her process works.  First she collects art, then begins taking notes and making sketches, then begins to actually build out the costume.


Where Karin really caught my eye was with her new Nebula outfit.  I am not sure if she shaved her head just to pull this off or if she did it for other reasons but holy hells Batman! it is an insanely accurate portrayal of Nebula from Guardians of the Galaxy.  This in my opinion was the best COSPLAY I have seen in 2014.  It is just so striking, perfect, and visually stunning that it is hard to put in words.

I am not the only one take notice of her Nebula Cosplay she is now blowing up the interwebs and even James Gunn has taken note of it.

Karin Olava ‏@KarinOlava Aug 4
I still can't get over this! @JamesGunn commented on my Nebula picture! :D pic.twitter.com/Go34dJbV7T

I also think it is really cool that she is picking characters that she loves and likes.  There is nothing fake about her just a real passion for the character she is bringing to life.