Is Beta Ray Bill in Guardians of the Galaxy?

Is Beta Ray Bill in the Guardians of the Galaxy? 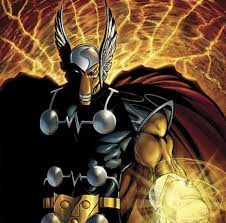 Many people including myself thought we saw Beta Ray Bill in the Guardians of the Galaxy movie. However, James Gunn when shown the character being looked dimissed this notion. While he dismissed it Marvel continues to throw other hints that the character exists in the MCU.

1) Creature in a holding cell of the Collector closely resembles Beta Ray Bill.
2) Skull picked up by Starlord on the planet of Morag looks similar to Beta Ray Bill.
3) Beta Ray Bill's Hammer is added to a Marvel museum in Disney.  The Hammer in question is not specifically called out however its description is clearly that of Stormbreaker.  See below.
4) Korbinites (The alien species of Bill) are one of the primary alien species depicted in Guardians of the Galaxy (Orange bald people).
5) There was a callsheet used for Guardians of the Galaxy beneath the name Ti Asha Ra.  This is a Korbinite character highly tied to Bill.
6) In Thor Ragnarok there is a large tower depicting the former arena champions on Sakaar.  The heads appear to be that of Bi-Beast, Manthing, Ares, (Maybe Fin Fang Foom) and........Beta Ray Bill.  The Sakaar Arena is controlled by one of the Elders of the Universe the Grand Master who has ties to the Collector from Guardians of the Galaxy.
7) Surtuur appears in Thor Ragnarok who was involved in destroying the Korbinite homeworld of Korbin.

To me it would seem that Marvel is hinting on a large backstory of Beta Ray Bill all without even mentioning him by name.

The trailer for Thor Ragnarok shows a lot of cool things but one of the most interesting is a tower on Sakaar.  The Tower resides near the Arena and the two structures seem to fully dominate the landscape.  On the tower are various faces that many believe depict various great champions that have fought in the arena previousily.  The very top component of the tower looks like a Celestial, then moving down the faces appear to be that of Manthing, Beta Ray Bill, Ares, Bi-Beast, and Fin Fang Foom.
Are these characters still fighting in the arena?  Are they deceased or have moved on from fighting?  That is not clear.

One component that links Thor Ragnarok to Guardians of the Galaxy is that Sakaar's arena is controlled by the Grandmaster who is an Elder of the Universe.  The Collector who appeared in Guardians of the Galaxy is also an Elder of the Universe.  Each Elder has survived eons by focusing heavily on one thing.  The Grandmaster focuses on martial combat, while the Collector focuses on collecting. 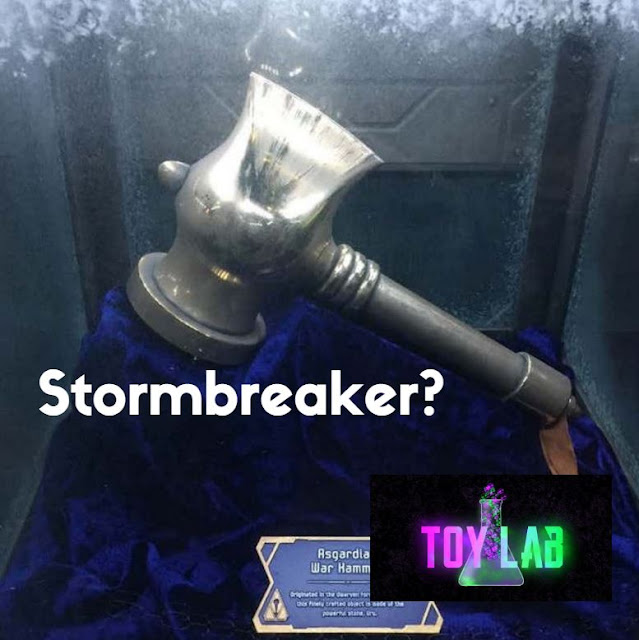 In the new Guardians of the Galaxy Breatout ride at Disney there is also a hall of Marvel artifacts and among them is an Asgardian Hammer that is not Mjorner.  It appears to look very much like Beta Ray Bill's hammer called Storm Breaker.  The artifacts appear to be part of the collection of the Collector further providing evidence of a linkage between the two characters.

The description of the hammer reads:
“Originated in the dwarves forge on Nidavellir, this finely crafted object is made of the powerful stone, Uru.”

This origin would match that of Beta Ray Bill's hammer Storm Breaker.  Storm Breaker's construction on the Marvel wikia is described as:


Odin had the Dwarves of Nidavellir create a new hammer made for the cyborg Korbonite warrior, crafted from the same Uru metal as Mjolnir. With the assistance of Eitri and other dwarf blacksmiths, they forged Stormbreaker.

These description appear to be damn near identical.  There are also not many other powerful Asgardian hammers floating around other than Mjorner and Stormbreaker.

While there is nothing solid it does seem that Marvel continues to find ways to hint at the appearance of Beta Ray Bill.


What I saw
There is a creature with a red cape in Guardians of the Galaxy that looks very much like Beta Ray Bill.  I would say that at the very least it had a horse like head.  It could be of his same species a Korbinite and not Beta Ray Bill.  This would be a change from the comics where Bill is the only Korbinite to look the way he does.  It could also have been one of the Kymellians who are aliens that have horse like heads.
Is Morag on GotG actually Kymellia I?

The image I saw went by quickly.  What I saw a figure with a horselike head and a big red cape standing in one of the collector cells.  I can't find the exact picture but I found one that is very close.
Collectors Museum Pictures

James Gunn has spoken.  He says this is not Beta Ray Bill, it is some other alien that looks exactly like Beta Ray Bill and has a hammer.  I am not sure if I buy it.  Actually, I know I don't.  Beta Ray Bill will be in Thor 3 just wait.

The other Beta Ray Bill possible connection was on the planet Morag where Starlord finds the orb.

There are skeletons on the planet Morag that resemble Korbinites.  They look like humans with horse heads.  Technically Korbanites do not look like Bill, Bill is combined with beasts to make a super powered protector.

The skulls could also be from the alien race called Kymellians.  Kymellians are humanoids with horse heads and they inhabit a world in the Andromeda Galaxy where Xandar also is.  I don't have enough information to say one way or the other.  If anyone can find this image please send me the link.

Ti Asha Ra Connection
It also seems that another prominent Korbinite character may have been in the movie.
Meet Ti Asha Ra the most secret character in Guardians of the Galaxy
This would provide another major Beta Ray Bill connection.


Who is Beta Ray Bill?