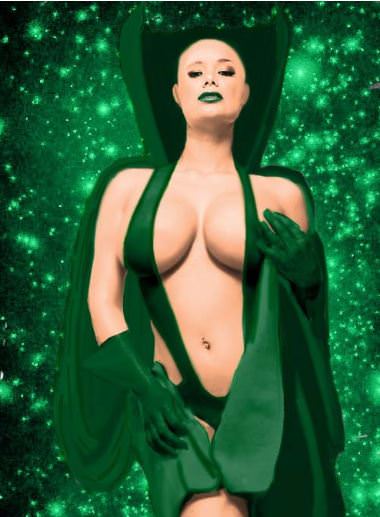 
Moondragon is a cosmic marvel character that is a powerful telepath and skilled martial artist.  She is most known for her bald shaved head appearance.


Bio:
Moondragon is Drax the Destroyer's human daughter.  Heather Douglas is born on Earth as a normal human but the brutal intervention of Thanos on her life sets her up on a very different path.
Thanos seemingly kills Arthur Douglas and his entire family.   Arthur Douglas is saved by a powerful entity and turned into  Drax the Destroyer.  Drax is sent after Thanos like a mad dog.  Unknown to Drax is the fact that Thanos's father Mentor also saved Arthur's daughter, Heather.  Mentor does not reveal her survival, instead he brings her to Titan where she is raised to be a killer by the Titans.


On Titan, she is trained by the monks of Shao-Lom.  She learns advanced martial arts, and science from the monks.  They also teach her how to develop her latent telepathic powers.  In the Marvel Universe, all humans have latent telepathic powers they simply do not know how to use them.  Through arduous training she becomes extremely powerful and eventually undergoees a ritual in which she needs to be battle a dragon.  She defeats the dragon.  To honor her victory over the beast she gives herself the name Moondragon.

Personality wise Moon Dragon is known for being arrogant, self righteous, and annoying.  She  is known for grating on other heroes including the Avengers.   This personality is due to her being raised by Titans and not understanding human relationships.  Her high level of education also isolates her from other humans.  She does become slightly more warm and compassionate as time goes on.  Eventually, she begins to develop relationships with friends and lovers.

One other unique aspect of Moon Dragon is her sexuality.  Moon Dragon is bisexual and has romantic relationships with both men and women.  Her romantic partners through the comics includes Daredevil, Thor, Quasar, Marlo Chandler and Phyla Vell.  The relationship with Phyla Vell is Moon Dragon's most well known relationship and has made both of them super hero symbols in the GLBT community.  Moon Dragon's non apologetic personality, open personality make her an especially potent symbol as she is oblivious to the thoughts and belief structures of others and couldn't care less what they think.

Her arrogance has gotten her in trouble.  She once tried to mentally control a planet at war and force them to be peaceful.  This manipulation was opposed by the Avengers, the Asgard and her father Drax.  In the battle with this group she kills her father.  After eventually being defeated by the heroes arrayed against her she is brought before Odin.  Odin forces her to wear a band that reduces her powers.  She ends up being taken over by the dragon that she had beat as a child.  A group of heroes kill her and the dragon.  Lucky she lives in the world of comic books and a new body is cloned and she promptly comes back to life.

All of Moon Dragon's powers come from training and will power.  Her telepathic ability is as high as almost any other Marvel character she is considerably stronger than Professor Xavier or Emma Frost.  She is also able to telepathically kill her extremely powerful father Drax.  She is also able to break through the shields of Galactus with ease.

Her martial arts training is also very high.  She has beaten the martial artist Mantis in a sparing session.