Who is the Fusia Girl in Guardians of the Galaxy? 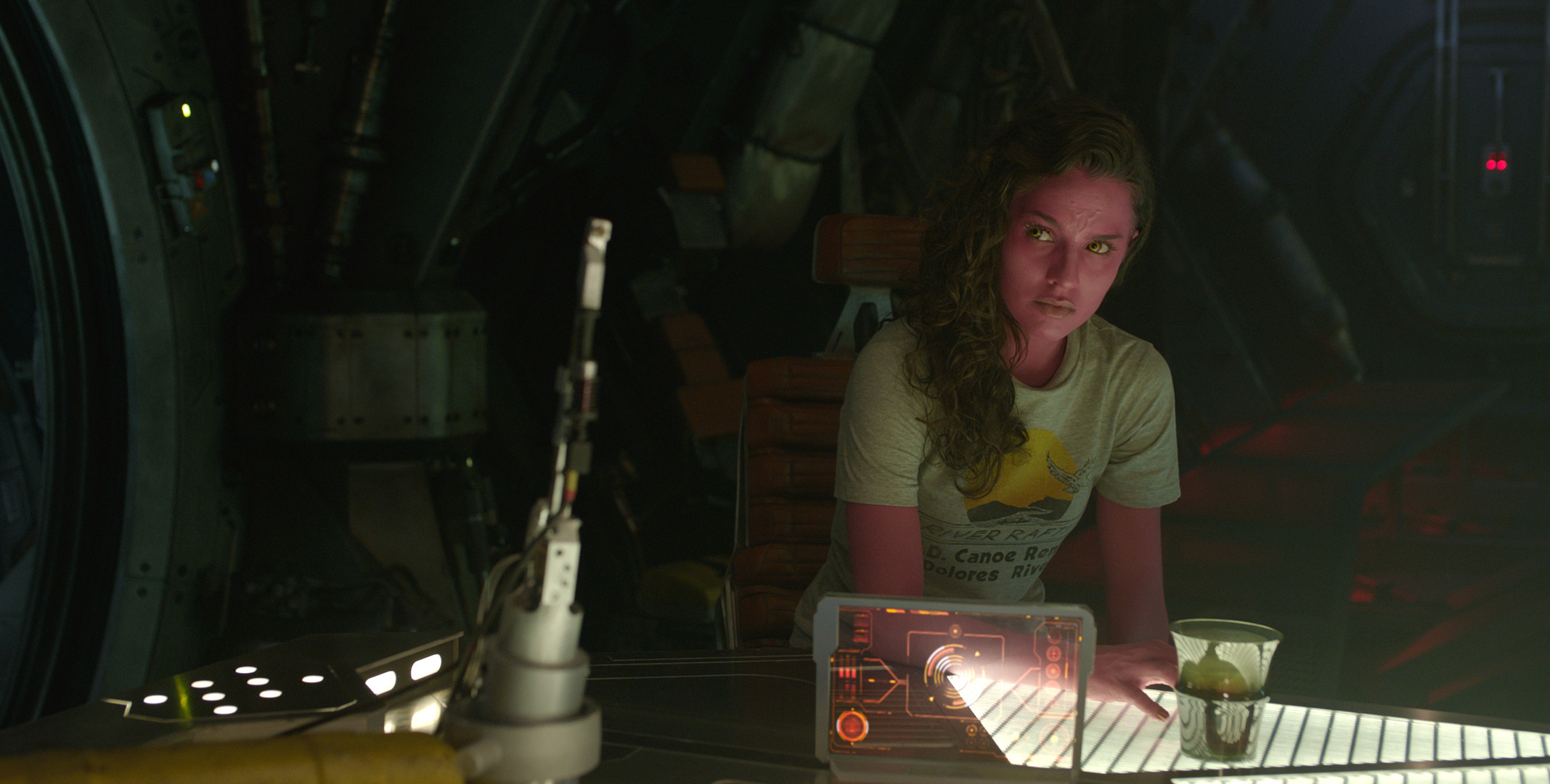 Who is the Fusia Girl in Guardians of the Galaxy

A question I have a lot after Guardians of the Galaxy Vol 1 is, "Who is the fusia girl in the Guardians of the Galaxy movie?"  The girl is not treated particularly well by Peter Quill. A victim of his "Pelvic Sorcery".  She appears in his ship the Milano as he flees with the Power Infinity Stone from the planet Morag.   He apparently forgot she was on board at all.  Geez Peter.  Many people found her to be intriguing and wondered if she was a character from the comics and....

My research into who she was began before the movie even came out.
My first guess is that Fusia girl is the character Carina played by Ophelia Lovebond.  However I quickly realized that she does not look like Ophelia Lovebond.  Carina is the daughter of the Collector in the comics and his assistant in the film.  This is obviously not Carina.

I think they are clearly different actresses but this still does not answer the basic question.
Who is she?


There is also another red/fusia girl shown in a cell in the collector's museum.  This girl appears to be a former assistant of the Collector who has fallen out of favor.  Apparently he is not a very nice boss.  This girl is also not the same but if I had to guess all of the fusia people are meant to be the same species. The mystery fusia girl is the comic character Bereet.  Bereet is an obscure character from the Incredible Hulk stories.   She comes from a Humanoid-Avian like race (Not the Shi'ar) called the Krylorians.  She is a techno artist which is a person that builds life like movies that entertain her people.   A techno artist would be like combining a rockstar and a movie director.   Her people are very advanced but are addicted to escapist techno art.  Using her advanced technology she can manipulate perceptions of people around her.  Bereet appeared in Hulk around the same time Rocket Raccoon did.

Both Bereet and Carina appear to be Krylorians type aliens in the film Guardians of the Galaxy.
Who are Krylorians?

Melia Kreiling
Bereet is played by actress Melia Kreiling whom I had not heard of before the movie.  She is certainly becoming a popular name right now.  Even though it was a small part, many left the theater wondering who she was.
If you want to see more of Melia Kreiling she is a cast member in the Showtime show the Borgias.  Melia has joined the cast of the show Tyrant and plays Daliyah.

IMDB Bio of Melia Krieling states:
Melia Kreiling was born in Geneva, Switzerland to American father Randall A. Kreiling and Greek mother Katia Dimopoulou, and she was raised in Athens, Greece. Melia moved to the UK where she attended the Northern School of Contemporary Dance, and later the London School of Dramatic Art. She soon signed with London-based talent agent Piers Nimmo, and immediately landed her first role in the Neil Jordan-created TV series The Borgias (Showtime) as Bianca Gonzaga, playing alongside Jeremy Irons. She went on to work on television hits such as The Bible (History) and blockbuster Guardians of the Galaxy (Marvel), as well as art-house films Committed (S.Kliris) and Suspension of Disbelief (M.Figgis). Following these, Melia relocated to Los Angeles, CA. Melia remains with Piers Nimmo Management and was also signed by talent agents David Bugliari and Rick Kurtzman at CAA, and manager Stacy O'Neil at Brillstein Entertainment Partners. Melia is a series regular on the hit TV show Tyrant (FX Networks), and will appear in 2016 in the upcoming films DXM (A.Goth) and Healer (J.Erskine).