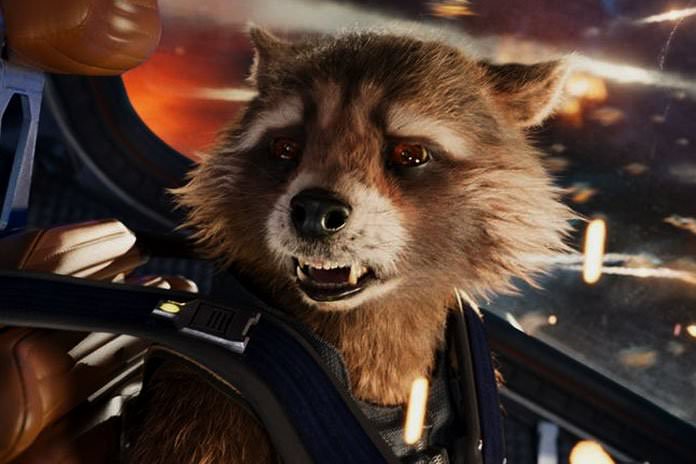 One would think that a relatively new character like Rocket Raccoon there would be a definitive answer on where he first appeared.  In truth there is a massive controversy swirling on where he actually first appeared.  I have seen borderline fist fights over this issue in comic book stores and comic cons.  There is an intense disagreement amongst the Marvel Aficionados as to what actually counts as Rocket's first appearance.  Scrolling the web on multiple sites you will find different answers.

Some people say he appeared in Marvel Preview #7 others say in Incredible Hulk #271 why the controversy?

First which was printed first:
Incredible Hulk #271 came out in May 1982

Unfortunately there are problems with Marvel Preview #7 that cause a slew of questions.

The first problem is that Marvel Preview #7 is not a comic book it is a black and white magazine and its stories where not always considered to be in continuity of the main Marvel Universe.  Some people argue that appearances in the magazine do not count as the first appearance of the character in the Marvel Universe.  The magazines were more like ad promos and not really Marvel canon.  Given the fact that Marvel Preview #7 is not a comic we can say definitely that the first comic appearance of Rocket Raccoon is Hulk #271.

More problems with Marvel Preview #7
Hulk #271 supporters take this one step farther and say that Rocket Raccoon never appeared in Marvel Preview #7 at all.  The character in Marvel Preview #7 is a separate talking Raccoon character who lives 10 thousand years in the future and calls himself Rocky.  He does  not have a giant gun, he does not mention halfworld or his girl friend Lyla, he also talks in a medieval antediluvian dialect unlike the Rocket Raccoon we see in other Marvel Stories.  The costume of the character also looks more fantasy based than the pure sci fi Raccoon we see in the rest of the stories.

When you look at this Rocky character you see a character that clearly resembles Rocket Raccoon but is not Rocket Raccoon.  The setting is that he is in a  fantasy scifi hybrid story called Sword and Star kind of like a Prince Valiant story 10 thousand years in the future.  Sword and Star and the main character prince are not considered canon anymore at Marvel. Prince Wayfair was considered to be the creator of the Microverse which was critical to the Micronauts a comic tie in to a set of toys in the 80s.  The Micronauts rights are no longer owned by Marvel though, they sold them to Hasbro.   People who claim Marvel Preview #7 is the first appearance point out that there are not many talking raccoons in comics period, and that both Rocky and Rocket were created by the same creator Bill Mantlo.  Also and this is a big one in favor of Marvel Preview #7 Walrun calls Rocket by both the name Rocky and Rocket in Hulk #271.

Hulk #271 supporters would counter that Rocket could never end up 10 thousand years in the future with a guy not in Marvel canon, talk entirely differently, not mention his home planet, and totally alter his costume.  Plus not sport a giant gun or otherwise act or resemble  like Rocket other than being a talking raccoon.


Bill Mantlo was working toward the idea of Rocket Raccoon but he is not there yet.  The Rocket in the story appears more like a medieval character and fantasy story.  He speaks different and appears to have an entirely different origin than the Rocket Raccoon that exists on Halfworld.  He does not mention his friends on Halfworld, or Halfworld at all.  The Rocky Raccoon exists 10 thousand years in the future dealing with a character that I'm not sure Marvel even has the rights to now.  It is obvious that Bill is working toward Rocket Raccoon but does he get all the way there in Marvel Preview #7? In my eyes he does not.

To me Marvel Preview #7 is CLEARLY the first appearance of Rocky the Raccoon a character that is a precursor to Rocket Raccoon much like Annakin Starkiller.

Both are very cool, both are part of comic history and both should be worth a lot! 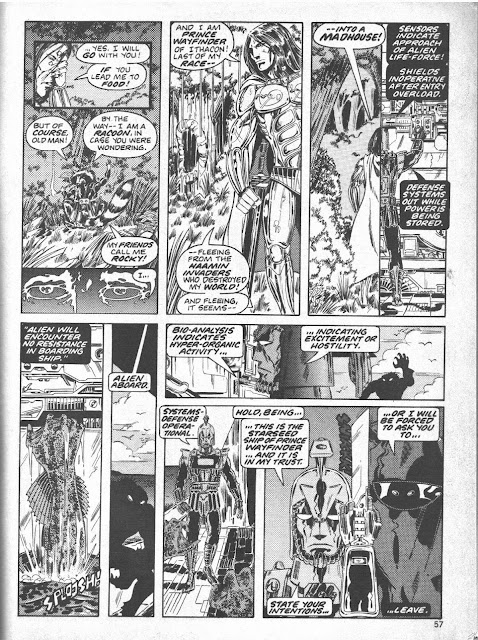 Bill Mantlo creator of Rocket Raccoon Could use your Help:
Hear the Raccoon! Plus Mantlo charity


Related More Nova Database info on Marvel aliens and places.  Who are Skrulls?  Who are Sakaarans,  What is Knowhere? Xandar? The Andromeda Galaxy? Learn more below: