Brie Larson will be Captain Marvel and fan art work has begun to come out of Brie as the iconic hero.  However Marvel has yet to release anything official.  Carol Danvers has been depicted in many different ways over her years as a hero so certainly there are a lot of options to use.  My guess is that her look will be based off her recent runs as Captain Marvel.

The Captain Marvel cover with Carol donning that mantle for the first time has become iconic in a short amount of time.  I really think that will inspire the look as much as her previous looks will.

In an interview with IGN Brie described what Captain Marvel meant to her.


“I find it's really hard for me to condense what she means to me. I was once a young girl and I was confused by what a hero was and what I wanted to be when I grow up and what was important to me. And so, I think it's so complicated growing up and to attempt to become a symbol of truth and navigating through all the weird questions of growing up feels so, I’m getting emotional just talking about this, it feels so important to me. When it comes to her, I mean just the fact that she can be a bridge between two worlds, that she can go between Earth and space and that her own personal place is in this little area between where Earth ends and space begins and that’s only hers is so moving to me. I’m just inspired.”

She also described to IGN being asked about what her depiction of Captain Marvel will look like.

See more of Brie's interview with IGN at http://www.ign.com/videos/2017/02/21/brie-larson-knows-captain-marvels-hairdo-is-a-big-deal

Some have praised this look, and others outright hate it.

Mark Brooks look:
Mark Brooks is one of my favorite artists and he has drawn Carol in a way that is somewhat inbetween Anka's and her traditional look. Cosplay:
There is some great Ms Marvel artwork and COSPLAY out there.  Some of it is prior to Carol making her switch to Captain Marvel.

I think Greg Horn has done some of the best Ms Marvel covers.
Here is some of Greg's work with Ms Marvel.  In my opinion no one in her history has better covers than these of Carol.   (Note this is prior to Carol becoming Captain Marvel so she is in the Ms Marvel costume) 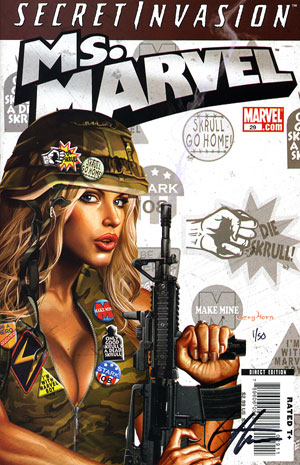