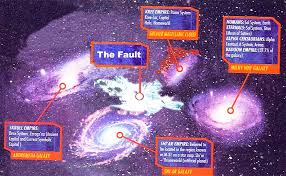 Maveth - A planet introduced in Agents of SHIELD it is not clear which galaxy the planet is located.  I think most likely candidates are Greater Magellanic Cloud (Home of Kree) or the Black Galaxy home to Ego the Living planet.

There are few mysterious places located on the edge of the expanding Universe:

Andromeda Galaxy (M-31)
Details:
The Andromeda Galaxy is a vibrant Galaxy in the Marvel Universe for the full break down of its Star Systems and aliens that reside there click on the Map below:

Note a common Marvel Error - The Shi'ar galaxy is commonly said to be M-31 this is an error by Marvel.  M-31 is the Star map number for Andromeda Galaxy (Skrulls Galaxy).  They likely meant M-33 which is the Triangulum Galaxy.  I have seen one post from some one else who thinks it is meant to be M-33 as well.  At any rate hopefully some one at Marvel will read this post and stop printing maps showing it as M-31(Like the one above).  Especially since the Shi'ar are currently the most important alien empire in the Marvel Universe.