Halfworld and the Keystone Quadrant Halfworld is most well known for being the home planet of Rocket Raccoon.

History:
Halfworld was settled by a humanoid type of alien (Potentially humans from a different world).  The human like aliens brought all of their crazy people to the planet.  For an unknown reason the  Shrinks (doctors or psychiatrists) leave the planet.  The shrinks leave robots and animals to care for and amuse the patients.  The patients now called "loonies" stay on the planet.  Apparently, the condition of the "loonies" is genetic and their children also are loonies. The shrinks also create a force field around the planet that keeps the loonies in and potential threats out.  This force field is called the Galacian Wall.

As time goes on the robots continue to diligently due their job of taking care of the loonies but a problem occurs when they are exposed to radiation and develop sentience.  The sentient robots begin to loathe begin stuck in an illogical planet and dealing with loonies.  The robots want to seek out a higher purpose but do not want to neglect their wards.  They begin to genetically tinker with the animals left on the planet making them into new sentient caretakers of the planet.  The robots then build a massive humanoid shaped ship out half of the planet and fly off.  When the robots fly away they take half the world with them, this is how the planet get its name.

Rocket Raccoon is one of the sentient animals created to be something like a law officer on the world. 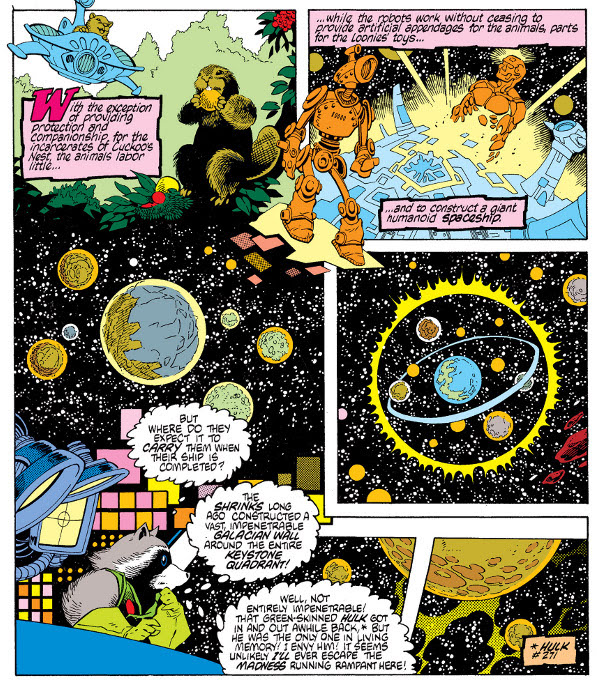