Patton Oswalt had a panel in Ballroom 20 of San Diego Comic Con and dished out a some HUGE details on season 2 of Agents of SHIELD.  This Season is going to kick off with dynamite like Boom as the war with Hydra gets serious.

In order to beef up SHIELD Coulson goes out to recruit some serious muscle to help his cause.  These new agents were part of the big reveal during comic con.


Patton revealed a big doozey in that a cast of Agents will include the character Barbara Morse AKA Mockingbird.

Mockingbird is a bad ass martial artist hero/ SHIELD agent who in the comics is married to Clint Barton / Hawkeye.  She does not have super powers but she is at one point injected with a version of the super hero serum that gave Captain America his powers.  This serum greatly enhances her reflexes and strength. She usually uses a pair of batons that can be merged into a bow staff.  Her fighting skill is very high and she is capable of going toe to toe with most villains.  She is also a PHD Biologist.  Basically, think of her as a more direct fighting type of Black Widow with the scientific mind of Simmons.  There are a variety of comics with her and Hawkeye that have a feel of Mr and Mrs Smith.

The character died and stayed dead up until the Marvel Event Secret Invasion where she was found to be alive and being held by the Skrulls.  Clint Barton and Mockingbird almost immediately began teaming up as the world's most dangerous couple.

Isabelle Hartley -
This is a character that will be new for the show and will be played by Xena! That is right Lucy Lawless will be playing this character.  I don't know much about her other than she likes swords and knives and is a veteran who Coulson seeks out to bring into his war against Hydra.


Lance Hunter -
This character is a bounty hunter who will team up with Agents.  He will be played by Nick Blood.   In the comics Lance Hunter is a British version of SHIELD called STRIKE.  He also is often involved with the character Contessa Allegra De Fontaine.  Contessa Allegra De Fontaine is another fun character most known for being a lover of Nick Fury.  I expect her to show up at some point during the season as well.  Listen for mentions of her when Lance Hunter hits the screen.

Not all of the reveals were of good guys.  It was also revealed that the agents would be facing the powerful Hydra agent code named Kraken.

Kraken is known for wearing a powerful helmet that covers his body in powerful armor.  His name was rumor for a large part of history because anyone who met him was killed.

He considered to be one of the most powerful and imposing Hydra agents / Leaders not an easy foe for the agents to go up against. 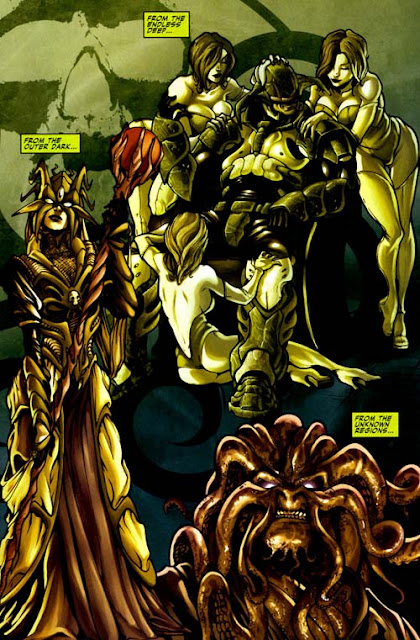