Apocalypse was basically created by X-Men writers in the mid 80s to be a new big bad.  They wanted a heavy weight villain to give the more dangerous and radical X-Factor team a reason to exist.  The character lived up to those plans.  He has been ranked #3 on Marvel.com on the list of important X-Men villains.  Personally, I would rank him at 2 beneath Magneto.

Philosophy: "Survival of the fittest"

You asked and I answered:
HOW IS APOCALYPSE DEFEATED 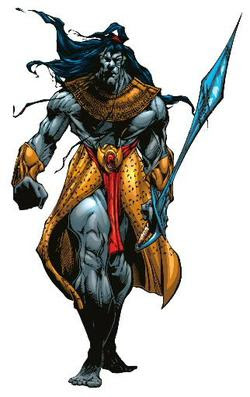 Apocalypse's real name is En Sabah Nur he is an ancient mutant born 5,000 years ago in Akkaba.  I am not clear if Akkaba is meant to be the same as the real location of Aqaba.  Akkaba is effectively near ancient Egypt.  When En Sabah Nur is born his mutation is already manifesting itself.  His mother rejects him out of fear due to his his bizarre appearance he has gray skin and blue lips.  He is rescued by a man named Baal of a group called the Sandstormers.  Baal and the Sandstormers do not care about appearance, they only care about strength.  They raise young En Sabah Nur in the philosophy of Survival of the Fittest.  In the ancient world he battles the Time Traveling Kang the Conqueror eventually defeating him and forcing him to leave.  Through technology left by Kang, and from alien technology he finds Apocalypse augments himself.  He creates a powerful clan of his followers and eventually goes into a form of suspended animated slumber.

Apocalypse awakens here and there through out time.  He awakens in response to threats to the world or to test the power of the world.  He is generally pushing Earth toward having more genetically powerful races of people.  Part of the reason for him to slumber is that it allows him to wait for the genes of evolving humans to catch up to his goals.  When he reawakens, wars, plagues and other disasters usually follow. These are events of his design to weed out the strong from the weak.

In the 1800's Apocalypse is awakened by the geneticist Nathaniel Essex.  He makes Essex into of his most powerful prelates known as Mister Sinister.  Sinister however has eyes on subverting the power of Apocalypse and uses his knowledge to create a mutant capable of killing Apocalypse, the mutant Cable.

Apocalypse is reawakened by the time traveler Cable.  Cable traveled in time hoping to stop Apocalypse from awakening but instead causes a disturbance that reawakens the evil mutant 10 years earlier.  This is where he first comes into conflict with the X-Men.

At one point Wolverine loses his admantium Skeleton.  Wanting to turn him into one of his four horseman Apocalypse regrafts the Skeleton onto him.

Apocalypse also alters the Angel giving him Bio Metal Wings and making him both into one of his four horseman and to his Hier should he die.  If Apocalypse dies Angel will pretty much go mad and take over his work due to an Apocalypse seed implanted into him.  This is explored in Uncanny X-Factor comics.

Powers:
It is difficult to pin down exactly what Apocalpse's powers are because he is shown at different times doing just about everything.

Apocalypse is not listed as an Omega Level Mutant but he is very powerful.  He can control his molecules allowing him to grow and change shape and form.  He can twist his body into different tools to suit his purposes.  His mutant ability also gives him the ability to heal and fight of viruses better than almost any other mutant with the exception of Wolverine.  Using both his mutant ability and technology has made him immortal.

He is sometimes shown as being able to adapt other mutants powers into himself through manipulating his own body.

He has been shown using Telepathy, and Telekinesis though it is not clear if this is from his mutant power or from technology.

In ancient times Apocalypse receives advanced technology from both Kang the Conqueror and the Celestials meaning his knowledge and technology is far more advanced than anything on Earth.  It becomes difficult to separate his own power from that of his technology.

First Wolverine has a conversation with Magneto how they are both Survivors.  This is a reference to the philosophy of Apocalypse of "Survival of the Fittest."  Perhaps, Apocalypse will appeal to both Magneto and Wolverine with a you are survivors appeal in the next movie.

Wolverine's claws are cut off in the movie the movie "The Wolverine".  Meaning he should have bone claws in the future.  However, his future self has the metal adamantium claws and not bone claws.  I do not think this is a continuity error.  I think Wolverine's future self has run into Apocalypse who restored his claws and made him into one of his Horsemen.  The other option is that Magneto gives Wolverine his claws back to battle Apocalypse.  If I had to guess I would guess Apocalypse gives him the claws and makes him into one of his Horsemen likely "Death."  See modern four horsemen introduced below.

There is also the final after credit scene, where a young Apocalypse is shown constructing a pyramid telepathically.  His four horseman are silhouetted on the skyline behind him.  He does not look very tough yet but he will be. 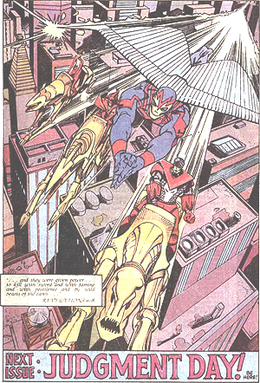 Interestingly some of the modern Horseman may have also been introduced in Days of Future Past.
One obvious candidate is Wolverine which would explain how he regained his metal claws.  He would likely become Death.
We also see characters in the Vietnam camp where Mystique frees them.  There is not a lot of point to this scene other than to showcase these mutants. One mutant has a power that seems to make people ill.  This mutant (Name?) would be a natural candidate for Pestilence.

Havoc and Toad are also in this group and they could certainly be War or Famine.

The Savior?
Nate Grey "X-Man" the son of Cyclops and Jean Grey and destined to stop Apocalypse is also shown in the beginning of the movie.  He is a boy clawing through the rubble of the future when he comes across a symbol of an X in the ground.

You asked and I answered:
HOW IS APOCALYPSE DEFEATED
on July 06, 2016

Email ThisBlogThis!Share to TwitterShare to FacebookShare to Pinterest
Labels: Adamantium, adamantium claws, Apocalipse, Apoclipse, Apocolpse, Apocolpyse, claws back, How does Wolverine get, Plot, preview, review, spoilers, When, Who, Who is, Who is Apocalypse, X-men, X-men Apocalypse