Who are the Inhumans?

The Inhumans are a branch of homo sapiens that have lived apart from their human brethren for most of their existence.  The most most well known Inhumans are their super powered royal family that rules the rigid caste system that forms their society.

Related Posts:
What is an Inhuman?
Inhumans CheatSheet for Agents of SHIELD fans
Will Vin Diesel be Blackbolt?
Nova Worldmind - Cosmic Races and Cosmic Map


Society:
The Royal Inhuman society is a rigid caste system based upon the mutations that occur after Terrigen exposure.  After the mutation occurs a Genetic council  places the individual in his place in society.  This place can not be changed.
The ruling class is the Royal Family, however even they are suppose to answer to the Genetic Council.  I say ''suppose to'' because Blackbolt is powerful enough to do whatever he wants.  The dude is like the Honeybadger of the Marvel Universe.  Blackbolt don't care, Blackbolt don't give a crap.
He and his wife are forbidden by the council to have a child because they fear what his awesome power could create in a offspring.  He has a child anyways.   The Genetic Council asks Blackbolt to let them raise the child and he complies.  However, when he learns that they plan to use the child against him he takes the child back.  Blackbolt is often wise and very measured in his actions, but he still does whatever he wants.

The Inhumans live on a mobile City called Attilan.  It has been located in various places on Earth.  It has even traveled to the Kree throne world of Hala, but has typically resided on the Moon of Earth.  The blue side of the moon the area built up by the Kree during the Cotati/Kree competition was Attilan's most well known and common resting place.

Powerlevel:
While the Inhuman Royal Family are not the most well known Marvel characters and some fans may have never heard of them, they are still extremely powerful.  They are basically humans who have been genetically engineered and mutated to maximize the celestial mutations that were built into humanity.  When you begin discussing who is more powerful than who in the Marvel Universe, Blackbolt's name is near the top.  Only a few humans can claim to be at an equal power level; Jean Grey and The Hulk come to mind.

Notable members of the Royal Family: 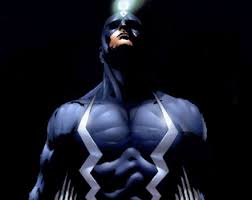 The leader of the Inhumans and the most powerful of their members.  Blackbolt can manipulate sound and greatly expand upon its power.  He can fly, create sonic force fields and augment his strength with sound.  He can release extremely powerful sonic blasts capable of wiping out Space Armadas and even destroying planets.  The dude is a walking sonic Deathstar.
Due to his extreme power he typically does not speak.  Allowing his wife, Medusa provide a voice to his thoughts.


Medusa is a very distinctive character.  She has long flowing hair that she can manipulate and use like arms.  The hair is super strong, making her into something like a super powerful octopus.

She is the Queen of the Inhumans and often acts as the voice of her Husband King Blackbolt and for the Inhumans in general.


Crystal:
Crystal can control the  elements Fire, Water etc.  She has been attached to Johny Storm, served on the Avengers.  Recently she was married to Ronan the Accuser.

Brother of Karnak adviser to the King

Adviser and Master Strategist of the Inhumans.  He is multiple the favorite Inhuman of multiple Toylab bloggers and the star of a very interesting comic series.

Brother of the King

Inhuman genius, and insane.  Sometimes he acts as an antagonist and sometimes as a friend.

Who is Maximus the Mad?


Ancient Inhuman Royal Kings:
Inhumans have been around for a long time and many have done important things:

Who is Eldrac the Door? - Ancient Inhuman Teleporter once part of Attilan

Related Posts:
What is an Inhuman?
Inhumans CheatSheet for Agents of SHIELD fans
Will Vin Diesel be Blackbolt?
Who is Blackbolt how is he so powerful?
Who is Karnak?
Who is Medusa
Who is Crystal?
Who is Maximus the Mad?
What is Attilan?
Who is King Randac?
Who is Eldrac the Door?

Email ThisBlogThis!Share to TwitterShare to FacebookShare to Pinterest
Labels: Agents of Shield, Blackbolt, Cosplay, costume, Costumes, crystal, Guardians of the Galaxy, Inhuman, Inhumans, Is Skye, Marvel, Medusa, Medusa Cosplay, What is, Who are, Who are the Inhumans