The Man-Thing easter eggs have you caught them? 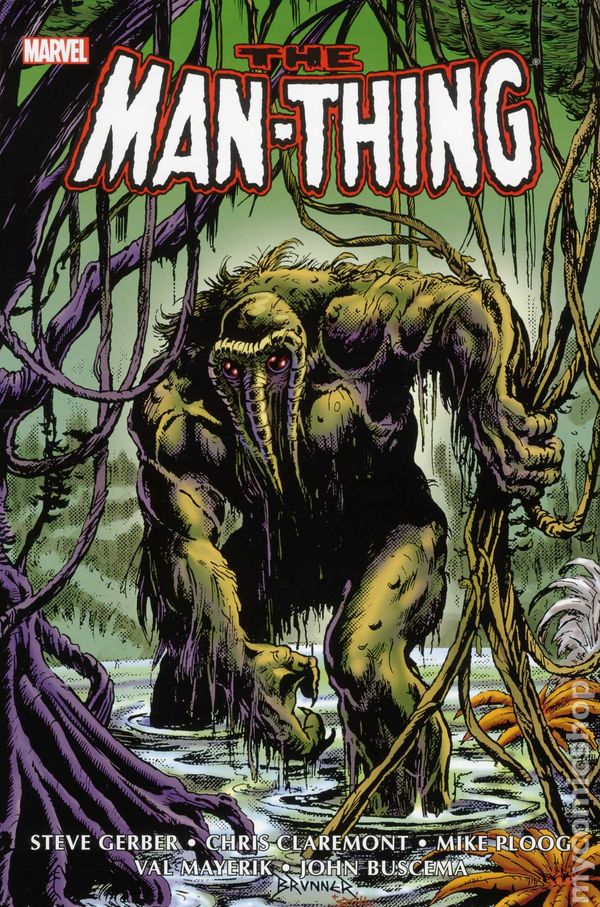 Man-Thing  is a character at Marvel very similar to Swampthing.  There is some controversy as creators of both characters at one point in time were roommates.  Man-Thing is considered to have been created first.  There is a Man-Thing movie (2006) it is Turrrrrrible.
The rights of Man-Thing are likely to revert back to Marvel relatively soon and Marvel seems to be paving the path for the character to have a place in its cinematic universe.   There have been a few interesting Man-Thing easter eggs.

"Who or what is a Manthing" There is another Man-Thing Easter Egg in Ironman 3 that is more obscure.  One of the extremis soldiers a woman who goes by the name of Ellen Brandt has a scar on her face.  This is pretty clearly a reference to Man-Thing 's girl freind in the comic who has the same name.
In the comic origins of Manthing Ted Sallis a scientist who becomes Man-Thing has a girl friend named Ellen Brandt.  When he becomes Man-Thing , he accidentally burns her face.  Man-Thing emits a burning acid with his touch.  She kind of deserved as she betrayed him leading to a bunch of people dieing and Sallis becoming transformed into a swamp monster.

Man-Thing is one of many characters who is tied into the superhero serum that was used to create Captain America. Ted Sallis was experimenting on the serum through Project Gladiator and when feeling pressured to show progress he injects himself with it.  The serum turns Sallis into the monster / anti-hero Man-Thing .  Man-Thing burns his girl friend's face then flees deep into the  Louisiana swamps.

Thor 2- Manthing Easter Egg
There is one more Manthing Easteregg.  In the comics Manthing guards a portal to important place called the Nexus of all realities.  The Nexus of All realities is mentioned on a chalk board behind Dr. Selvig.  It is on the bottom of the Chalkboard see below:


What does mean for Marvel's cinematic universe?

From Marvels Easter eggs it seems that project Gladiator may have been controlled by SHIELD or at the very least they are aware of its outcome...Man-Thing .

Ellen Brandt could have either been involved with Gladiator or found Extremis as a means of recovery from Man-Thing 's acid.  Perhaps Killian's Extremis project was even tied somehow to project Gladiator.  I believe they showed plants being experimented on in Ironman 3.  The plants in AIM lab could be another subtle wink toward Man-Thing 's origin.

It is possible that Manthing guards the Nexus of all realities like his comic counterpart.

Related:
Who is Man-Thing?
Has Agents of Shield introduced SWORD?
Designing MODOK for TV?
Marvels Agent of Shield speculation HUB