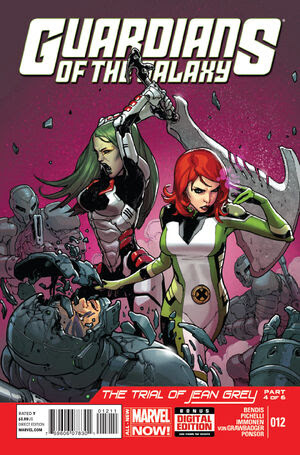 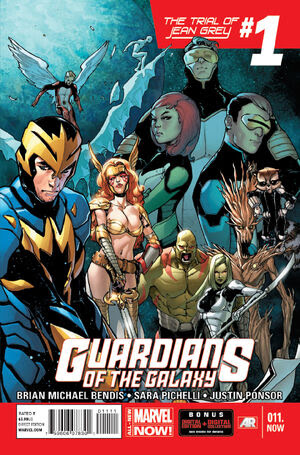 Review of the Trial of Jean Grey:

Spoilers Spoilers and then Some Spoilers 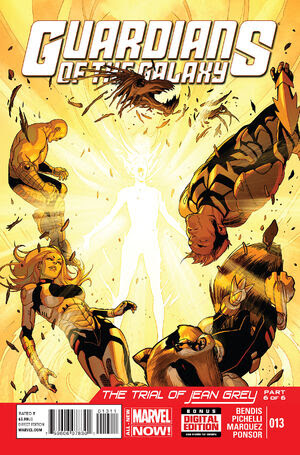 Overall, I really liked it and would recommend picking it up.  That said I will admit an extreme set of biases.  I like the modern Guardians of the Galaxy team, the young classic X-men, the Starjammers, and the Shi'ar royal guard A LOT.  It would be hard for someone to smoosh those groups together in such a way that I would not like them.  It may not even be possible.  Serious dose of bias aside I think most people will like this story on some level.
The all new X-men remind me of Spiderman after Brand new day.  It is way for the writers to write stories with the classic X team in the present, and also have them younger with less baggage.


If there is any complaint it is that the story is dealing with a lot of characters and some are not given much screen time.  Drax?  What did Drax do?  I have no idea.

That said there are enough awesome and hilarious moments in the series that wipe out the minor faults.

Synopsis:
The young X-Men from the past find themselves brought into the future.  The Shi'ar who experienced great losses as a result of the Dark Phoenix kidnap the young Jean Grey.  The Shi'ar's aim is to hold her for trial for the crime's of her future self.
The Starjammers and the Guardians of the Galaxy take the X-men for a ride after the Shi'ar.

Some of the Shi'ar like the telepath Oracle are not sure about trial but the bullheaded and very bad ass Gladiator don't want to hear about it.
The combined firepower of the Guardians of the Galaxy and the X-men end up being too much for royal guard.

In the battle Jean learns new powers, that make her markedly different than her predecessor.  This helps because she is suddenly able to go toe to toe with the Gladiator and also because it shows she is not the same Jean Grey that became the Phoenix.  Generally, it is always fun to see the awesome but arrogant Gladiator get his ass handed to him (Especially by a teenage girl).  With the change in Jean's powers and the sudden show of force by the Earthlings  the case against Jean is dropped.

One of the best lines came from Cyclops telling off the Shi'ar
If you, If any of you, come back for Jean...if you are anywhere near the planet Earth ever again...I'll kill you.  I'm not joking.  If I even hear you're thinking about it, and believe me, we'll hear...I will bring the entirety of the mutant race, the Avengers, the Fantastic Four...I will bring a hellstorm of Asgardians, mutants, Atlanteans, and Hulk monsters right down on top of you!  We brought this much right to you in one day! I'm telling you...stay the @#$@#$@ away from the Earth.

At the end the heroes return to earth and there is a lot funny and interesting banter.  Then Cyclops drops a bomb...(I don't think I will spoil that sorry).

Angela and Angel seem to have .......I'm not sure what they have. Pretty much a strike out by Angel sorry dude but she is the real thing after all.

Starlord and Kitty seem to have this cutesy hand holding thing going on.  Somehow those 2 the quiet yet heroic Kitty with the brash Starlord just seem right together.  He gives her a cosmic communication device so they can text or something :) Knowing Starlord who knows what he will send her.  "Hey Kitty here is a picture of my.......pet Alien Raccoon"