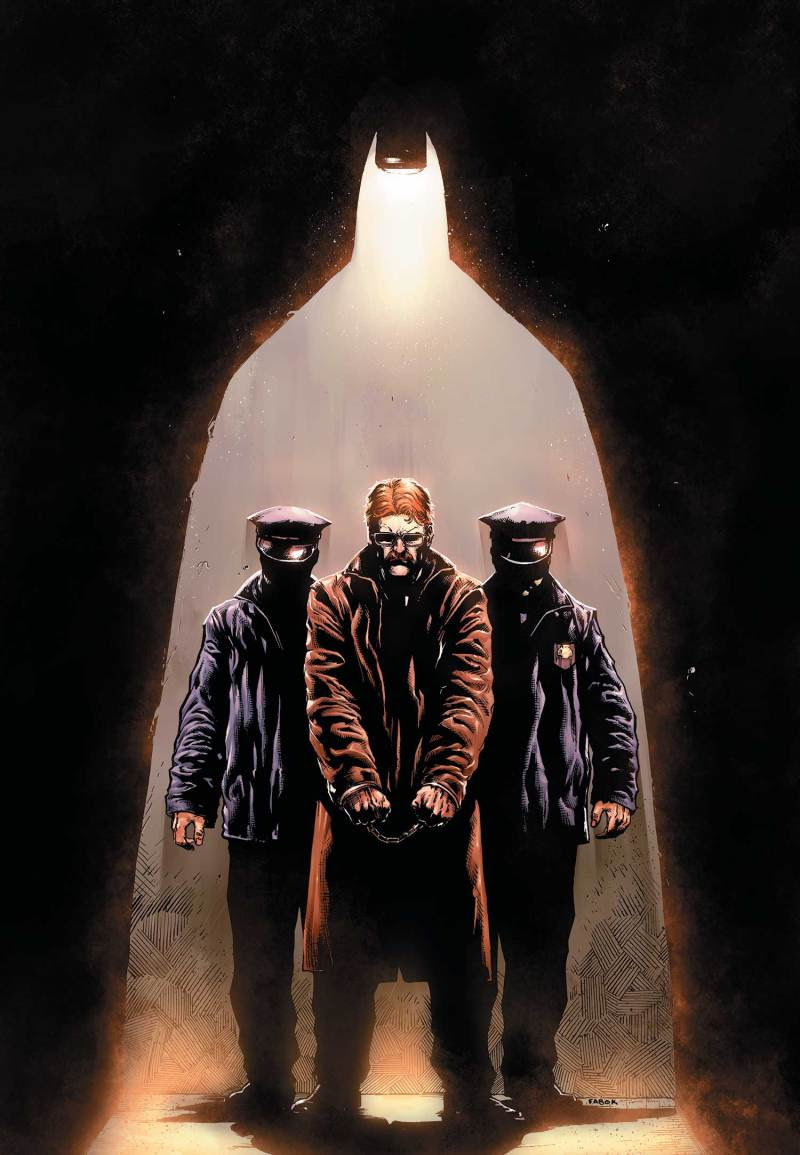 NOTE: I am going to trying to keep the top section mostly spoiler free and then have a more detailed spoiler section below.  I think people jumping into the series may need the spoilers to know what is going on.

If you look back at my review of Batman Eternal #1 (Review of Batman Eternal #1 - THIS IS AWESOME!  )I felt it was really focused, complete and just down right  good.   I was worried that just by Eternal's concept of being a story that connected all of the Batman characters that it would get bogged down.  #1 did not.  However, in #2 the story begins to get pulled like a laffy taffy in many different directions and we are left with a less satisfying story.
#2 is a book that is primarily about jack hammering, and foundation laying.  It is shows the us the repercussions going on in the Gotham PD and with the Bat characters of the events at the end of number 1.  It kind of feel like in moments you are drinking through a fire hose as different characters new and old are thrown at the reader.

On its own, this book would not be satisfying.  It would also not make a very solid starting off point.

That said this book is coming out weekly so this type of book that is laying all of this ground work is ok.  By the time I read it I already had Batman Eternal #3 underneath it.

The story they are trying to tell, its overall arch is impressive.  This story is going to bring out many of the questions and history of this New 52 Bat Universe and tie it all together neatly.  It's exciting comic opera and this 2nd book gives you some of that perspective even if it comes in a thousand bitty pieces at you in this issue.

Overall I give this book:

Spoilers Spoilers and then some Spoilers

The end of Batman Eternal has Jim Gordon being arrested for gunning down an unarmed man and inadvertently causing a mass accident that leaves hundreds dead.  After battling Pyg both Batman and Gordon give chase to him.  Gordon ends up chasing one of his henchmen into a train station.  Gordon sees the man pull a gun and shoots him.  The bullet kills the man then hits an electrical box behind him that causes a massive train accident that shuts down the entire train tunnels.

The suspect who Gordon shot no longer has a gun, and video surveillance shows that he never had a gun.  Gordon is arrested and his status of commissioner is removed.

Now in #2 all of the Bat characters are hearing the news.  Batgirl (Barbara Gordon) seems to be taking the news especially hard.
Batman certainly does not believe that Gordon is guilty but he is stumped as to how it was set up and by who.
Meanwhile, the new big bad that has arrived back in town meets with the mayor.  This is a villain deep in Gotham's past who was run out by the Penguin and the Bat vigilantes he promises the mayor to return Gotham to the way it was.  At the end of the book we learn that the villain is Carmine Falcone the mob boss who ran Gotham before the Batman.  I found this reveal a little underwhelming at first.  Lets face it the costume freaks are always more exciting but for this story that is about Batman's history and family, Falcone works.  He hits a lot of buttons, and ties a lot of themes together.
Also with a Batman story it is hard to know if this Big Bad stays the Big Bad or if the torch will be passed to someone else.

The series is beginning to feel like a lot of great Batman stories, it promises some fun twists and turns.  If I had to compare it to anything so far I would say it feels similar to Hush.
on May 12, 2014