From The Vault - Marvel Premiere #15 - First Appearance of Iron Fist

Lets go back and look at the original story.  Luckily, I have a trusty copy of Marvel Premiere #15 on hand.

First friends to understand Iron Fist we must go back in time.  A time before I was born, the 1970s.  What do you know about the 1970s.  Disco?  We are going back before Disco,  Yes before disco my friends there was...

Marvel sees the Kung Fu craze going on and decides to create some Kung Fu based characters.

The first is Shang Chi created in 1973 by Engelhart and Starlin.  Shang Chi's story is that he is the son of the evil Fu Manchu but decides to become a hero instead.  Shang Chi has some strong Bruce Lee like similarities. About a year later Marvel beefs up their Kung Fu masters further and introduce Iron Fist.  Iron Fist was supposedly based on a character called the Amazing Man.

The origin of Iron Fist is told through a series of Flashbacks
One thing that I always find interesting about this book and story is that it has aged rather well.  It is a good story and the art / writing from the 70's still hold up today.  A kid today could pick this book up, read it, enjoy it and understand it and that is not always the case.

Danny Rand's origin is a story similar to many heroes he is an orphan.  Orphans make damn good heroes it seems.   Similar, to Bruce Wayne's origin we learn how his parents died.

A young Danny Rand, his parents, and Harold Meechum a close family friend are marching through the Himalayas.  Danny's father takes a spill and Harold takes the opportunity to get rid of Sr. Rand by stomping on his hand.  It seems Harold has eyes on Rand's business and his Wife.  In a Darth Vader like moment Harold appeals to Danny's mother to let him help her up.  If you don't do it for yourself do it for the boy he appeals.  Danny's mom is like screw you dude.  Her exact words are "Let my son grow up to kill you with his own two hands --or let him die like his father."  Wowza, those are cold words for a kid to hear.  Both of his parents are tough cookies, tough like...IRON. Ok, so that was cheesy moving on.

Mom and Danny manage to climb up the cliff and start searching for the city of Kun Lun.  As they approach the bridge to the city they are attacked by wolves.  Danny's mom realizes they can not outrun the pack and sacrifices herself so Danny can make it to the temple.  Kun Lun soldiers arrive shortly later and save Danny but it is too late for his mother.

So young Danny is a bit angry.  His Dad fell to his death and his Mom was eaten by wolves...damn.  This story is not in the travel brochure to the Himalayas for a good reason.  Imagine Peter Parker, Bruce Wayne and Danny Rand comparing the death of their parents.

Peter:  I am so sad my parents died in a car crash.
Bruce:  Wuss, my parents were killed by a murderer because of me
Danny:  You are both pansey asses... my dad was dropped off a cliff by his business partner and my mother climbed up a cliff only to be eaten by wolves right infront of me.
Peter: Wow you are more scary than Dr Octopus!
Bruce:  ....errr....damn...Can I give you the name of my counselor

The Kun Lun soldiers bring young, angry Danny to the nearby Temple City of Kun Lun.  Kun Lun  happens to be home to bad ass kung fu artists who decide to train the boy.  While the boy is initially consumed by the thoughts of getting revenge for his parents, the monks hope over time and through training he will drop his vendetta. 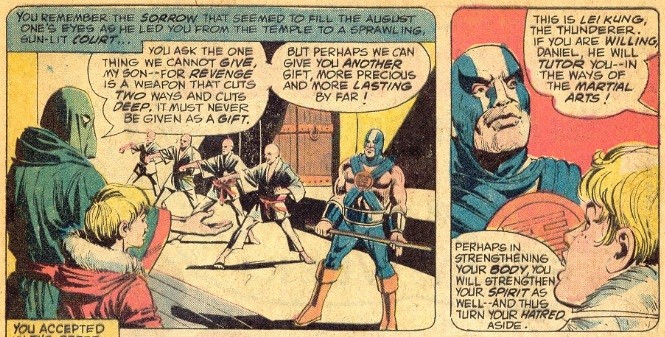 There Danny is introduced to his trainer the bad ass Kung Fu master Lei Kung the Thunderer.  The Thunderer looks a bit like an Asian super hero / Mexican wrestler.  This is the bad ass that will train Danny Rand to be a bad ass himself.  Kun Lun is a magical city that appears and disappears so Danny can not leave.  He trains and becomes the most bad ass of the bad asses under the tutelage of Lei Kung.  He then defeats a dragon and sticks his hand into its heart giving him the power of the Iron Fists.  When Kun Lun returns back to Earth, Danny takes his leave to go find Harold and get his revenge and fulfill his destiny as Iron Fist.

So yeah about as bad ass of an origin story as they come.

In the present day, Iron Fist beats up stooges and then cuts through a robot with his bare hands, because they are strong as Iron Hands!