Who is Eugene - The Walking Dead 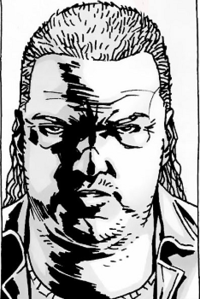 Eugene Porter is a character that is introduced in Walking Dead #53.  He shows up at the Farm sporting his distinctive mullet with his companions Abraham Ford, and Rosita.  In the comics the group goes to the farm after the prison is destroyed.  Eugene claims that he has unique knowledge that can help cure the zombie condition and that it is necessary for him to get to Washington DC.  Eugene has a radio that he says was used to contact the remaining government officials.  Abraham Ford who has just lost his family finds new purpose in his life and becomes determined to take Eugene to Washington DC.

Mullet:
Eugene has been asked about his ridiculous mullet.  He claims it is a method of camouflage to appear dumber and less important than he really is.

Eugene would like there to be more of a romantic relationship with Rosita.  Rosita at one point calls him her only friend but generally rebuffs his romantic advances.  He is pretty much kept in the freind/brother zone.  Eugene is not good with people and can at times be a selfish, dick which generally thwarts any chances he has with Rosita or other females.

Rick and his group are always skeptical of Eugene's claim to have special knowledge.  It turns out that Eugene was indeed lying.  Eugene was a teacher and used his general knowledge to create a grift about being a potential savior of humanity.  He identified that he lacked the skills and toughness to survive on his own.  Using his grift he was able to give himself protectors who would help him survive.  He has very little interest in actually getting to Washington DC because it will reveal his charade.  When the truth is revealed Rick protects Eugene to keep him alive.


While this all very bad the fact is that Eugene is intelligent, and resourceful.  The character also undergoes and a dramatic evolution.  Rick changes Eugene's mind set.  In Rick, Eugene sees the savior of humanity that Eugene himself pretended to be.  Eugene becomes one of Rick's most trusted associates.  Eugene uses his intelligence to create an ammo factory so that they can begin building their own ammo to fight of the Saviors.   Eugene is captured by Negan the leader of the Saviors.  Negan known for his brutality  threatens Eugene with mutilation but Eugene refuses to turn on Rick.

Where all out war leaves off Dwight a Savior who wants to help Rick and kill Negan frees Eugene.