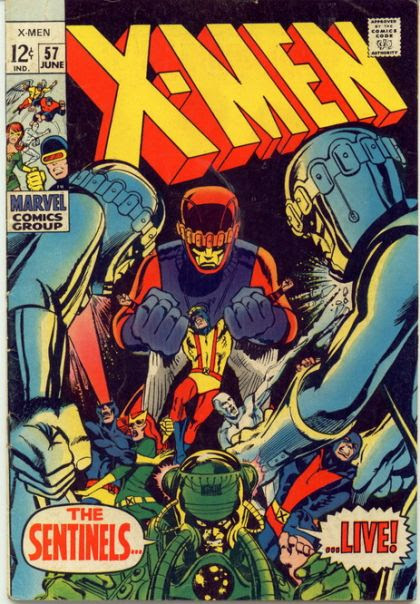 A few things to watch for and know about before you see X-men: Days of Future Past.  The story for Days of Future past comes from one of my personal favorite runs on X-men.  The run of writer Chris Claremont.

First lets talk Chris Claremont and History:
Chris was given the X-men as a young writer because they liked him, but could not just hand the new kid something doing well.  X-men at that time was doing pretty poorly.  Chris an actor by trade approached writing the X-men like method actor.   He wrote a lot about the characters feelings, motivations.  His plots were generally more complex and dealt with deeper issues than those seen before.  He really can be credited for making comic books more serious and mature.  His character felt like real people, with swings of emotions, and desires.

Chris has done a few stories that have already been made into movies.

Famous Stories by Claremont
All of the Wolverine movies/stories are heavily influenced by Claremont.  You can almost consider Wolverine to be a Claremont creation.  I could write a book on this so lets just leave it at that for now.

God Loves, Man Kills - William Stryker story which was the inspiration for almost all of X-2
Dark Phoenix Saga - Considered one of the best comic stories during the 1970s, was really poorly recreated in X-3
Days of Future Past - Maybe the best X-men story EVER (Period Exclamation Point)

The Days of Future Past story to me is Claremont's masterpiece (Plenty would argue differently) and is the best X-men story ever.   This is a big statement because you are dealing with a property that is twice as old as I am.
This story is important because it cements the importance of social and racial tolerance.  In this story we see where the road of intolerance goes in the Marvel universe and it is not a nice place.  The overall social roots of using mutants as symbols for ethnic/political/religious minorities is hammered home here.  The X-men may have done more to push the idea of tolerance of any work of literature, since the Bill of Rights.  Make no mistake you are watching a comic version of the Magna Carta, To Kill a Mocking Bird, Bill of Rights, Gettysburg address on the screen.  As a work of art the X-men may have shaped social attitudes more than any of those documents ever did and ever will.
The reason why it has not been made into a movie before now is because it requires the caste to be old and young and some how not to be cheesy.  Fox is taking advantage of a window where it has two X-men castes one young and one old.  Both castes are known already to the movie going public.  These two castes are a unique resource that allows for this epic story to be told.  It is a genius move by Fox to move aggressively toward telling this story and getting all the actors on board and signed up.  Kudos to the actors who I am sure may be making less on this movie because of how many of them there are...Big Thank You.

Changes to the original story in the movie:
The most major change I see is that in the comic Kitty Pryde is sent back into time, not Wolverine.  The change for the movie is done for a few good reasons though.  Days of Future Past was written before I was born in 1981.  At the time Wolverine was growing in popularity but no where near his present status.  He would not get his own limited series until 1982 also by Claremont.  A lot has changed since 1981 and Wolverine has become one of the top known Marvel characters in both comics and in the movies.  In the movies Hugh Jackman is likely the most famous comic book character actor.  I think he would beat out Rodney Downey JR (Iron Man) and Christian Bale (Batman).  While,  I am disappointed in hearing that Kitty Pryde will not be featured more in the movie, I understand it.  Not utilizing Hugh Jackman / Wolverine in this way would be outright criminal.

Iceman as an Omega Level Mutant
Iceman is considered to have potential Omega level mutant powers.  Omega level mutants are mutants who have vast world redefining powers.  This means that Iceman has the potential to be one of the most powerful mutants next to Jean Grey.  Bobby in both comic stories and the movies is somewhat slow in developing his vast powers.   In this movie we should see a much more advanced and powerful Iceman.
The limits of his powers are somewhat insane. One of the few times where we see what he is able to do is when Emma Frost takes a joy ride in his body and is amazed at his potential power. He can convert his body into organic ice/water/vapor.  He can spread his consciousness throughout water, controlling it and adding its mass to himself making himself huge.   It is unclear what the limit of this power is.   If he is near say an ocean he may be able to control the full body of water.  His physical body can be destroyed and he can recreate his body using moisture in the air making himself potentially immortal.  He can create animated Ice golems. He can fly by freezing moisture in the air and riding it like a surf board.  He can teleport vast distances by traveling through water.  He can create complicated and massive structures out of ice almost instantaneously.  He can kill anyone by freezing the water in their bodies to absolute zero.  He has used this power to freeze the Hulk.  He can also make most machines instantly stop working by freezing them to absolute zero as well.  He basically has the capability of destroying the world in a multitude of ways if he choses to.

What of these powers will we see on the screen?

Likely most of the powers will not be shown however based off a few clips we will see a pretty amazing Iceman.  He will be able to take on his Iceform, fly on a ice surf board and spray freezing beams and ice from his hands.  Look out Bobby move over for Iceman.  I think it will be beautiful and amazing to watch Iceman in this film even it is only shown for a few brief moments.

Trask and the Sentinels

The Sentinels make their appearance on Television.  Fans of the 90s animated series of X-men will recall that the series basically started out with emergence of the Sentinel program.  They became one of the primary threats/ villains faced by the X-men.  In the "Days of Future Past" storyline kids of the 90s learned through cartoon form how terrible of a threat they were to our X heroes.  X-men may have been the first cartoon to show heroes dieing and dealing with the subject of genocide.  Heavy subjects for a Saturday morning.
One of the first episodes of the series had a giant robot hunting down the teenager Jubilee for doing nothing but hanging out at the mall and being a "Mutant."  It was wrong it was injustice, it was intolerance being taught to us by giant robot thugs.  Is there anything more intolerant than a preprogrammed robot?  They are the symbol, the face of cold intolerance and because of that one of the most important villains ever created.


Part of the reason why I oppose Drones the USA uses is because I realize where a program like that can go.  I remember Days of Future Past and the Sentinels.  It won't happen you say.  Pish Posh, just wait.  The Sentinels evolve over time and so to will the drone program. They only evolve to become more powerful and intrusive.  Yesterday, I learned a drone flew over a pot smoking hippie rally in downtown Denver, chew on that.  I don't care for weed, but I know that what begins with Mutants can quickly end with everyone.  Of course some government good doer had our best interests at heart when he flew that drone overhead, so to did Trask when he built the Sentinel program.  Trask will be played by the brilliant Peter Dinklage who we all love as Tyrion in Games of Thrones.  I think he will play a multilayered, complicated villain in Trask.

Evolution of Wolverine into a Mature Leader

Wolverine in the movies so far has not been shown as much of a leader.  In this movie he will be forced to.  We should really see Wolverine become a lynchpin of X-men and the ultimate and fiercest defender of Xavier's dream of a world where men and mutants live in peace.
Wolverine fighting Sentinels is also epic because he can just tear the suckers to pieces.

Final Thought:
I think this film looks like it is trying to mine the depths of subject matter in Claremont's writing and I hope they are successful.  If you do not leave the movie thinking about anything, then Fox did something wrong.  X-men should make you think, feel and most importantly care.


Best Cyclops Story Ever? Are you ready?
Trial of Jean Grey - X-Men team up with the Guardians of the Galaxy
on April 23, 2016