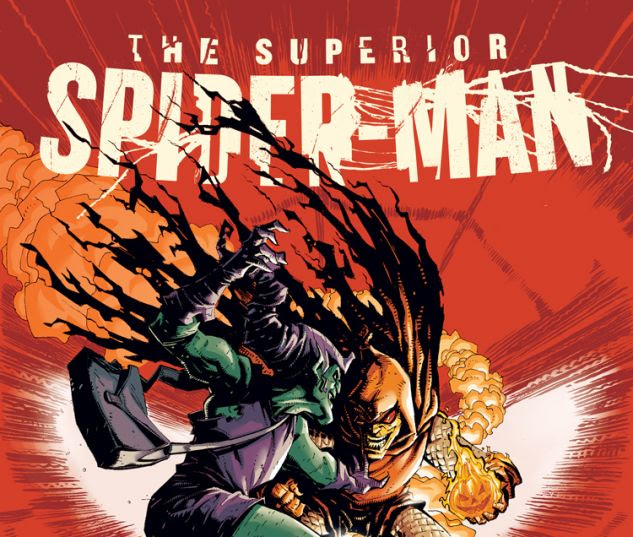 Warning:
Spoilers, Spoilers and then Some Spoilers

This is the final book before the final story of  the Superior Spiderman called Goblin Nation.  After the Goblin Nation story ends Peter Parker will be back in control of his body.   Already in the previous book Spiderman 25 we Parker exterting himself in the background of Oto's consciousness and he is able to force out the black alien symbiote.

Early on in the Superior Spiderman Story we learn that the green goblin added an exploit to Spiderman's spy drone software that causes them to ignore any goblin like face.  This has led for the Hobgoblin and Greengoblin to have the last remaining criminal empires left in New York.  With a lot of bad guys now assembled beneath the goblins the Green Goblin feels that it is time to move against Spiderman.

Before Goblin Nation kicks into high gear the two Goblin armies need to decide who leads them.  This is a Highlander like moment their can be only one.  The Green Goblin (Who we are led to believe is Norman but this is not certain and likely a red herring) calls out the Hobgoblin into an all out battle.  During the battle, the Green Goblin proposes that the two leaders battle for control of the entire operation.  The Green Goblin win seemingly killing the original Hobgoblin Kingsley.  Of course there is a twist in this.

While the Goblin Nation is consolidated beneath the Green Goblin, Spiderman has isolated himself from his friends.  The Avengers do not trust him and debate who he is under the mask and what is causing his bizarre behavior.  Carlie Cooper has now been turned into a goblin herself.

Now the stage is set True Believers bring on the Goblins.